I don’t want to be a pessimist, but after this week’s 1883, I’d be shocked if even a quarter of Captain Brennan’s group makes it to Oregon.

Not that it’s necessarily their fault! As the episode’s opening montage shows us, in the Big Scary West, death is waiting behind practically every blade of tall grass. If the dirty water doesn’t get you, a wagon accident… or a coyote attack… or a snake bite in the tush (yeah, they actually show that) certainly will.

How best to mitigate the risks of such a perilous journey is the subject of this week’s episode, and that quandry doubles as the issue that drives a fissure between James Dutton and Brennan about which literal direction (east? west?) to take. Read on for the highlights of “River.”

EAST DOESN’T MEET WEST | As the group approaches the river, James wants to head west. After all, that’s the way the group ultimately is heading. But Brennan would rather keep traveling east until they reach a better crossing point, especially because the Germans don’t seem like they’ve got the wherewithal to ford the water just yet. However, as James (and Thomas) point out, winter is rapidly approaching, and life is going to suck significantly more when it arrives.

James points out that he doesn’t work for Brennan, so he and his family are going to head west, and that’s it. The captain is irked. 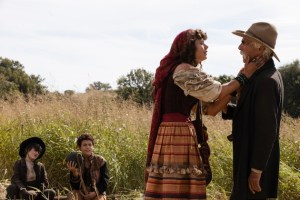 THE NEW MRS. BRENNAN? | He’s even more irked when he learns that two of the Germans have stolen food and supplies from Noemi, a widow whose newly dead husband owed them a debt. She and her two sons are in bad shape, don’t know how to handle their wagon, don’t know how to hobble their horses, etc. When Brennan promises to see Noemi safely to their destination, she awkwardly offers to be his wife; the gesture (which is proffered with her hand down his pants) angers him, and he growls at her that he won’t be around to teach her anything when they get to Oregon. (Seems that death wish is still burning pretty brightly, eh?)

Thomas and Brennan then find the men who took Noemi’s stuff and beat them up, demanding that they return the items. And THEN, Brennan breaks the men’s wagon and kicks them out of the trip. “If you steal, you stay where you stole,” he says, de-saddling their horses and slapping their flanks so they’ll run away. (Side note: This seems foolish, no? Why not keep them around as spares?) Brennan threatens to kill the men if he sees them again, then admonishes Josef — the tall guy German who speaks English — to get a better handle on his group. Afterward, Thomas quietly points out to Brennan that they need the group’s trust in order to lead them. 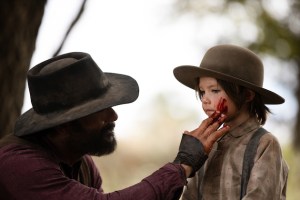 OH DEER | As all of the strife is going down between Brennan and his customers, Elsa and Margaret volunteer to help the cowboys with the herd. This gives Ennis ample opportunity to flirt openly with Elsa, who flirts right back; Margaret notices all. Meanwhile, James brings John hunting, and they take down a deer. “It’s your first kill, so I’ve gotta blood you,” Papa Dutton tells his son, wiping some of the animal’s blood on the boy’s cheeks. He points out that they have to thank the animal for giving its life so that they can eat. “When you kill things, son, it makes you a little less man, a little more animal,” James says. “We try to find the balance between them. That’s all life is.”

Back at the camp, James still doesn’t want to hear anything about going East — especially because it’ll add three weeks to the trip. “You said you’d help, and you’re not helping,” Brennan counters, but James won’t be swayed. It gets pretty testy when the captain points out that he can’t have a member of the traveling party publicly questioning his authority. But Dutton angrily answers that he’s neither Brennan’s employee or patron, and “I only care about my family.”

BRENNAN LAYS DOWN THE LAW | A short distance away, the Germans — including the two that Brennan ordered to leave — are agitating for ditching the captain and Thomas, pointing out that they haven’t been much protection so far on the journey. The men talk a big game… until they realize that Brennan is right there, hearing everything. He challenges one of the men to a duel, and when Brennan can draw his gun before the other man can even find his in its holster, the German in question starts crying like an infant.

In the war, Brennan says, he was in battles in which thousands died. “When I say killing you means nothing to me, I mean it,” he adds flatly. “Killing you means nothing.” But he lets them go, even though doing so will put a target on the group’s collective back once the men hit Fort Worth and start talking. The whole incident takes a bit of a toll on the old captain, who tearily tells Thomas that his daughter was someone who could’ve made the world better, the kind of person Thomas earlier said was the reason they were going through with the trip in the first place. Anyway, he also announces that the wagon train will leave in the morning, heading west. 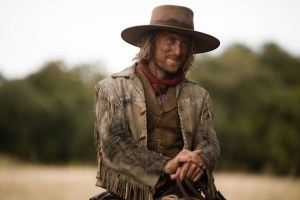 After learning from Margaret that Ennis and Elsa fancy each other, James finds the young man the next morning and gives him permission to court the teen. “You break her heart or get handsy, we’re going to have a problem,” James warns him. “Define handsy,” Ennis shoots back, which was… not the right answer. “Joke. Bad time to tell it,” Ennis quickly backpedals. “Sorry, sir.” (Ha!)

Now it’s your turn. What did you think of the episode? Sound off in the comments!