25 Most Iconic VMAs Moments, From Madonna's 'Like a Virgin' to 'Miley, What's Good?' (Photos) 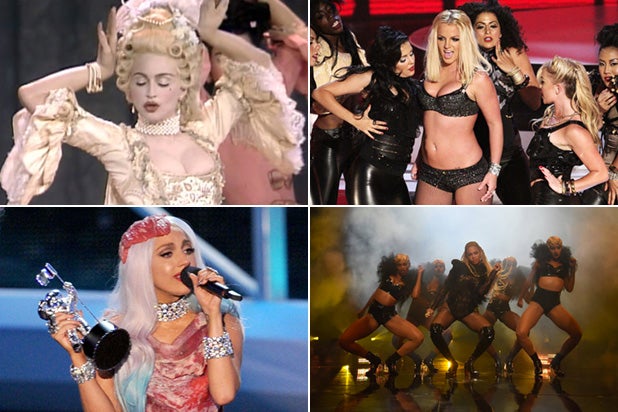 If the MTV Video Music Awards have ever been about the awards themselves, that era is long past. The most unpredictable and frequently over-the-top awards show remains one of the last-standing watercooler TV events by delivering iconic moments year after year. Here are a few of the most legendary from the show’s 36-year history.

Madonna performed her single “Like a Virgin” at the very first VMAs in 1984, donning a wedding dress for a performance that looks downright tame by modern standards but raised a few eyebrows in its day.

Looking to top her last performance when she returned to the VMAs stage in 1990, Madonna went for an elaborate 18th Century France-inspired aesthetic for her rendition of Video of the Year nominee “Vogue.”

Michael Jackson and then-wife Lisa Marie Presley shocked the audience when they locked lips for an awkwardly long and stilted kiss while introducing the 1994 VMAs.

In 1995, Courtney Love crashed Madonna’s live post-VMAs interview by throwing makeup at the pop star and screaming across the room. “Courtney Love is in dire need of attention right now,” Madonna deadpanned before being forced to cede her airtime to the Hole singer’s antics.

In hindsight, the idea of Fiona Apple appearing at the VMAs seems like an odd fit, but one suspects it never made less sense to anyone than to Apple herself, who famously proclaimed “This world is bulls—” while on stage to collect her Best New Artist award.

Lil Kim’s racy outfit at the 1999 VMAs grabbed the attention of many a red carpet photographer, but the rapper’s one bare breast also captured the imagination of her co-presenter Diana Ross, who couldn’t resist giving Kim’s chest a gentle onstage tap.

Upset about his band’s loss to Limp Bizkit, Rage Against the Machine bassist Tim Commerford bum rushed the VMAs stage in 2000, attempting to bring the entire night to a literal crashing halt by scaling the background. He failed and spent the night in jail.

Former Disney star Britney Spears had no shortage of moments marking her new persona as an adult pop star, but none more iconic than her 2001 performance of “I’m a Slave 4 U” with an albino burmese python named Banana wrapped around her shoulders.

In 2002, Britney Spears presented Michael Jackson with a lifetime achievement trophy in honor of his birthday, but her use of the phrase “artist of the millennium” seemed to capture Jackson’s imagination, leading him to deliver a speech accepting an award definitely does not exist.

For decades Madonna stood as the biggest provocateur at the VMAs, and inviting Britney Spears and Christina Aguilera to join her on stage in a re-creation of her iconic “Like a Virgin” performance was meant to be something of a torch-passing. What no one was expecting was for the three performers to up the ante by making out on stage.

Britney Spears has had many ups and downs throughout her decades-long career, but her glassy-eyed performance of “Gimme More” at the 2007 VMAs stands as one of her most public fumbles, a warning sign of the rocky road ahead.

With four now-legendary words — “I’mma let you finish” — Kanye West ensured that Taylor Swift’s career would be inextricably tied to his own. Whether its a feud between stars, a troubled friendship or a media narrative from which one party would like to be excluded, the story of Kanye and Taylor has transcended debate about whether or not Beyonce made the best music video of all time.

Lil Mama effectively tanked her career when the spirit of Jay-Z and Alicia Keys’s “Empire State of Mind” carried her out of her seat in the audience and onto the VMAs stage in 2009. Confused viewers may have at first believed the stunt was intentional, but by the time Jay-Z attempted to shoo her off like a dirty New York pigeon, her fate was sealed.

Despite a long career in New York and two giant singles in “Just Dance” and “Poker Face,” Lady Gaga was still far off from the mainstay pop star she is now when she performed “Paparazzi” in 2009. A self-consciously arty and borderline-manic performance that ended with her bloodied body being lifted into the air, Gaga’s VMAs debut was a bold statement by an artist looking to stake her position in the pop landscape.

A year after the interruption heard round the world, West returned to the VMAs to debut “Runaway,” a haunting toast to “douchebags” and “assholes” that’s widely regarded as one of the best and most self-reflective singles in the rapper’s catalogue.

If there’s an image from the 2010 VMAs that will endure the test of time, it’s Lady Gaga, who showed up wearing a dress made out of raw meat, accepting her Moonman from Cher, wearing a re-creation of one of her most iconic ’80s costumes.

Blue Ivy Carter made her television debut at the 2011 VMAs, when Beyonce took the stage to perform the immaculate throwback single “Love on Top.” “I want you to feel the love that’s growing inside of me,” she told the audience, nailing every dance step and key change before surprising the crowd by unveiling her baby bump.

The VMAs have come to be defined by flashy costumes, big energy and even bigger stunts, but in 2011 Adele showed everyone up by slowing it down. Accompanied by just a piano and a spotlight, the British songstress brought the house down with her world-conquering ballad “Someone Like You.”

Rihanna opening the 2012 VMAs with a medley of her hits “Cockiness” and “We Found Love” isn’t often the first performance that people remember, which is a shame because the seamless shift between the DGAF attitude that would later become her trademark and the party-starting pop star persona that defined her early career was so skillfully executed.

If Miley Cyrus twerking on Robin Thicke at the 2013 VMAs didn’t launch the thinkpiece industry, it certainly sent it into high-gear. Conversations about race and culture online have since become commonplace, but for many, it was Cyrus’s wagging tongue that led them to first encounter the phrase “cultural appropriation.”

When Beyonce accepted her Video Vanguard Award in 2014 with a 15-minute medley of the songs from her groundbreaking self-titled visual album, it was the fact that she stood in front of the word “feminist” that caught people’s attention. But looking back, it’s the other parts that are most notable — the effortless stylistic shifts and confident swagger that would later be honed and refined into her staggering, two-hour performance at Coachella years later.

Ahead of the 2015 VMAs, much of the conversation revolved around a social media spat between Nicki Minaj and Taylor Swift over well-deserved criticism of the lily white list of nominees. That feud was publicly put to bed by the two artists when they opened the show together, but before the night was over, Minaj had trained her sights on a different target. Firing off a warning shot from the stage in the direction of the night’s host, Minaj spat, “Miley, what’s good?”

Kanye West’s public statements have gotten him more attention than his music in recent years, a phenomenon which dates back to at least 2015, when he was awarded the Video Vanguard Award and opted out of a performance in favor of a long, rambling speech. To this day, it remains unclear whether or not he was serious when he threatened to make a bid for the White House in 2020.

Without a host, the 2016 VMAs had an erratic energy that felt liable to unspool at any moment, but thankfully Beyonce was there to salvage the show. Performing the hits from her 2016 album “Lemonade” with commitment and ferocity, she held the entire night together through sheer force of talent.

Lizzo, taking a long swig from a bejeweled bottle of tequila in front of a giant inflatable butt at the 2019 VMAs, provided great meme fodder for Twitter and TikTok and capped off her run as one of the year’s most successful artists.