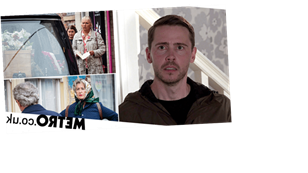 There is violence aplenty in what promises to be an action-packed week in Coronation Street, as Todd Grimshaw’s (Gareth Pierce) return to the cobbles brings with it plenty of drama.

Eileen (Sue Cleaver) is tasked with identifying a dead body, and Todd wants her to claim that it he who’s died, so that gangster Mick Costello will believe that he’s dead, but when she ultimately fails to do so, Mary Taylor (Patti Clare) suggests a macabre solution to Todd’s problem.

However, Mick soon shows up on the eponymous street, and takes Eileen and Todd hostage at No. 11!

Elsewhere, Gary Windass (Mikey North) is made an offer by Ray Crosby (Mark Frost) — that is, before he ends up in a violent showdown with gangster Mick!

It’s all kicking off on the cobbles next week, and if you simply cannot wait to see what lies ahead, then check out our first-look gallery previewing all the drama to come.