$550 million and counting: Why song catalogue sales are booming

For an artist who made his name on working class anthems and blue collar fantasies, Bruce Springsteen is officially in his financial “glory days”.

Last week The Boss made headlines after it was revealed he’d sold his entire song catalogue to Sony Music Entertainment for an estimated $US550 million ($773 million). The New York Times said the sale “may well be the biggest transaction ever struck for a single artist’s body of work”. 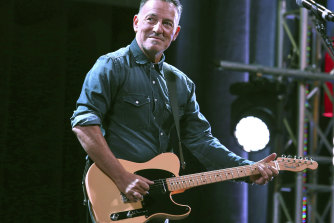 Bruce Springsteen has sold his music catalogue for a reported $US550 million.Credit:Invision

Springsteen’s coup is the latest, and largest, example of a boom in boomer rockers selling their song catalogues – including Bob Dylan, who sold his to Universal Music Publishing Group for a reported $US300-400 million in December 2020; Neil Young, who traded 50 per cent of his 1180 songs to Hipgnosis Songs Fund for approximately $US150 million last January; and Paul Simon, who sold his catalogue to Sony for $US250 million in April.

The trend has also extended beyond ageing rockers seeking to capitalise on their valuable work ahead of their retirement years: in January, pop musician Ryan Tedder sold his songwriting catalogue to US private equity firm KKR for $US200 million; in June, EDM star David Guetta sold his catalogue to Warner Music for $US100 million; and bands like Imagine Dragons and The Killers have also capitalised on the current explosion.

Why is this boom around song catalogues happening now?

“It’s unprecedented, but it’s part of a larger historical trajectory,” says Charles Fairchild, associate professor of popular music at the University of Sydney.

The value in music rights, he says, has been driven by surging demand in licensing – the fee, for example, that a filmmaker must pay to use a song in their movie, or that a cover band must pay if they want to record an existing song – in the streaming age.

“If you look at the pre-internet music age, licensing music was a surprisingly small part of the industry in terms of their overall revenue. We had a lot less venues in which to experience music, a lot less of the time. So the industry’s philosophy was always, let’s just get them buying albums,” says Fairchild.

“Now there’s a million different streaming services, and they all pay their own licensing. Film and television have got to the point where there are huge departments of people just dealing with the licensing of music for their movies or shows, and there are other areas like video games where music licensing has done nothing but go up.”

In the same way, investors might park their money in real estate, private equity and investment firms – such as Hipgnosis Songs Fund, which over the past three years has amassed a catalogue of around 65,000 songs worth $US2.55 billion, including the catalogues (or partial catalogues) of Red Hot Chili Peppers, Shakira, 50 Cent, Mark Ronson and Lindsay Buckingham – have noticed the radical potential to profit off such intellectual property in the streaming age.

To borrow a quote from a publishing executive cited in Billboard, “music and booze are the only two industries that flourished when people are both happy and sad”. For buyers, compared to other commodities, music right now is a sound investment.

“These buyers look at [the licensing landscape] and say, we can benefit off this,” says Fairchild. “It’s a roaring trade.”

The pandemic’s lingering disruption to lucrative live touring, as well as the short value that streaming offers (while royalty shares vary, it’s been reported that Spotify pays $US0.00348 per song stream, and Apple Music pays $US0.00675), means musicians have also become increasingly cognisant of new ways to maximise their income in real-time.

Fairchild says the inner workings of deals such as Springsteen’s are intricate and generally unknowable. Having sold his catalogue, does he lose control over how his songs are used? Will we see The Boss’s songs commercially exploited, an ad playing something like, “Baby, we were born to run… in Nike Air Zooms”?

“I would guess the number we see, $US550 million, is not the actual amount [Springsteen] gets as such because there’s probably a lot of trigger clauses and a lot of ‘if x and y’ clauses, which is how these things usually go,” says Fairchild.

Is there also the potential that the trend might reach Australia, that, for example, Barnesy might sell his stake in Cold Chisel’s catalogue for multi-millions? It’s doubtful, says Fairchild.

“I think Australia just doesn’t have that scale,” he says. “I think Kylie would be the obvious choice because she has such a profile overseas, but the scale of potential earnings around someone like Springsteen or Dylan is just astounding.

“I can’t think of someone off the top of my head who’s bigger than Springsteen in this sort of way,” adds Fairchild. “But even then, I would say this is probably still not the peak, amazingly enough.”