The red centre barely knew what hit it on Sunday as the Labor and Liberal campaign planes touched down in Alice Springs within a few hours of each other.

In their sights was the seat of Lingiari – an electorate that has known only Labor MP Warren Snowden as its representative since it was created in 2001, but with his retirement, the Coalition has sniffed an opportunity in the seat held on a 5.5 per cent margin. 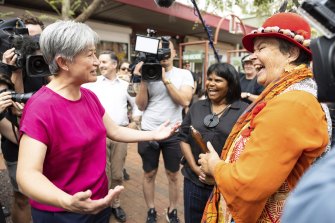 Shoppers in Todd Mall were caught by surprise as the press pack trailing the Labor campaign cut a swathe through Sunday markets. Leading the way was Wong on a charm-offensive mission as she greeted locals, posed for photos, and purchased some handmade crafts and lotions from stallholders.

“Oh my god it’s Penny Wong,” a couple of young women whispered to each other, whipping out their camera phones to snap a pic.

Labor’s candidate for the seat, former NT deputy chief minister Marion Scrymgour, remained close by. They were flanked by Snowden whose name recognition in Alice Springs was worth capitalising on – so much so that Scrymgour’s corflute features not just her face, but also that of the retiring MP.

A few blocks away, the prime minister’s campaign bus had pulled up – a rare feat for the rival camps to be within bumping distance of one another as they crisscross the country. 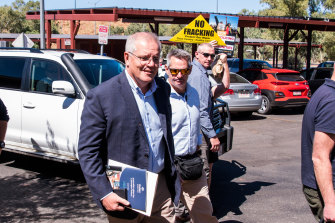 But it wasn’t all positive energy. The Greens and GetUp were following the media scrum, waving anti-fracking placards in a bid to occupy the background shots that make the evening news.

The government has supported plans to open up the Beetaloo sub-basin, south-east of Darwin, for fracking, something environmentalists say will increase Australia’s greenhouse gas emissions by 13 per cent.

The protesters followed Scott Morrison to the council chambers where they chanted loudly from outside the building in an attempt to drown out his press conference with Senate candidate Jacinta Price and Alice Springs mayor Matt Paterson.

Morrison dismissed the protesters as “not a large number” and said it wasn’t uncommon to attract dissenters.

“We’re a broad and diverse country and everybody’s entitled to their view,” he said.

“There are some loud voices out there today. But there are many, many quiet voices all around this country, which want to ensure that we have a strong economy on the basis of balanced and sensible economic policy.”

Price appeared more upset, saying the protesters had come from interstate without any solutions for her community and “have no right to carry on like this”.

“This is out and out disrespect for an elder of our country, our prime minister,” she said.

At Labor’s stop at Purple House, an Indigenous-owned and run health service, Wong noted people had mentioned the fracking issue as she walked through the mall – “I was at the market today, unlike Mr Morrison,” she said.

The prime minister received a different kind of prickly reception at the Alice Springs Desert Park where he went to announce $1 million for the conservation of bilbies in the NT. But bilbies, being nocturnal animals, were not awake to thank Morrison, so he met an echidna instead.

Wong said voters in Lingiari, where more than 40 per cent of the population is Indigenous, needed to look beyond the razzle-dazzle of announcements and look at which party had the better plan for First Nations people.

“[Morrison] knows how to do this, he is making more announcements. He will make a lot of announcements in this campaign,” she said.

“First Nations people, First Nations communities of this land need a prime minister who will take responsibility and deliver on his promises for all Australians.”