A wedding dress was found 'a little worse for wear' on the side of a Maine highway, and there's definitely a story here 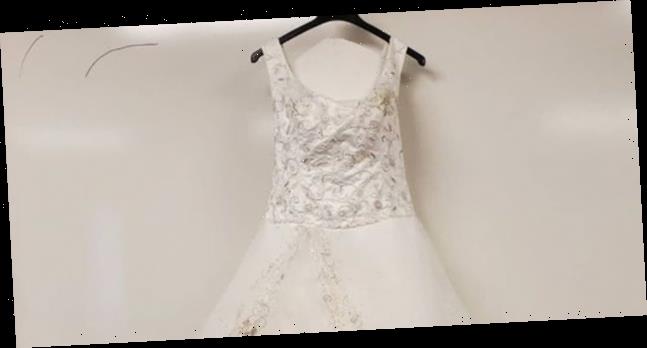 It's not an object that usually ends up in a state police agency's lost and found.

Early Saturday morning, Maine State Police responded to a call about debris on the side of Interstate 395 in Bangor, Maine, a spokesperson told Insider. It was thought to be some kind of Styrofoam or plastic. It turned out to be a wedding dress.

The gown features an embroidered bodice, full tulle skirt embellished with sparkles and flower detailing, and a long train.

Maine State Police posted a photo of the dress on its Facebook page, hoping to track down the owner. They don't have any leads yet, but they did make lots of people on the internet very curious about the story behind it.

Hundreds of commenters speculated about how a wedding dress could have ended up on the shoulder of a highway.

"Maybe it was a divorce party," one wrote.

"Need a Netflix doc about this," another commented.

"This is the beginning of a terrific short story," another commenter wrote.

Several Facebook users also noticed that the scenario resembled a scene from the 1977 film "Smokey and the Bandit," in which the character Carrie (played by Sally Field) leaves her husband-to-be at the altar, catches a ride with the Bandit, and tosses her wedding dress out of the car window.

The dress' origins are still a mystery, but officials are doing their best to crack the case.

If you have any information about the wedding dress, contact Talia Lakritz at tlakritz@insider.com and the Maine State Police at (207) 626-3800.