ABC managing director David Anderson has defended the broadcaster’s coverage of the historical rape allegation against Attorney-General Christian Porter as journalism of the “highest quality” and in the public interest.

At a Senate estimates hearing on Tuesday, Mr Anderson stood by the ABC’s decision on February 26 to report that an anonymous letter containing a historical rape allegation against a cabinet minister had been sent to Prime Minister Scott Morrison and other federal MPs. 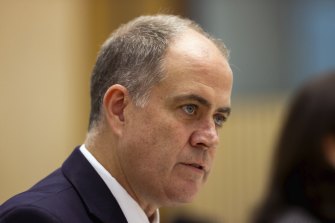 ABC Managing Director David Anderson has defended the broadcaster’s coverage of the historical rape allegation against Attorney-General Christian Porter as journalism of the “highest quality”.Credit:Dominic Lorrimer

The article by investigative reporter Louise Milligan, published on the ABC’s website, triggered a deluge of reporting from other media outlets and Mr Porter outed himself as the minister at the centre of the allegation days later.

“No reputable media organisation could have ignored the existence of the letter or the fact that politicians on both sides of the despatch box had referred it to police,” Mr Anderson said.

He prefaced his remarks to the Senate hearing by declaring the defamation action launched by Mr Porter last week over the article would constrain his ability to discuss the issue. But he rejected claims that the ABC had selectively reported details from the letter.

“The Statement of Claim filed [by Mr Porter’s lawyers] includes alleged aggravated damages particulars that echo those kinds of allegations. As I said earlier: it is not appropriate that I be drawn on those issues now because many of them may be discussed in open court proceedings,” Mr Anderson told the hearing.

“But I will say this: those allegations are denied and I am confident that the journalism was of the highest quality and that this will be borne out in the court proceedings. We will defend the case and our reporting, which we believe is in the public interest.”

Mr Porter has vehemently denied the allegations. In documents filed in the Federal Court last week, lawyers for Mr Porter claimed the article, which did not name him, conveyed a series of false and defamatory claims, including that he “brutally raped a 16-year-old girl in 1988”, when he was 17, and that this contributed to her taking her own life.

The ABC has previously defended its decision not to approach Mr Porter for comment on the grounds the article did not name him and that it instead sought comment from Mr Morrison’s office.

Asked by Greens senator Sarah Hanson-Young whether the broadcaster feared the federal government would cut the ABC’s funding as retribution for its coverage, Mr Anderson said he had faith there would be no reprisals.

“I’m always worried about the ABC’s funding no matter who is in government, frankly. I do not sit here expecting reprisal,” Mr Anderson said.