Vaccinations in aged care homes are behind schedule just days into the federal government’s rollout as an untrained doctor was revealed to have delivered the wrong dose to patients in Queensland.

A key provider of COVID-19 vaccinations for aged care residents confirmed it will not be able to meet its week one deadline as facilities wait to find out where they are in the vaccine queue. 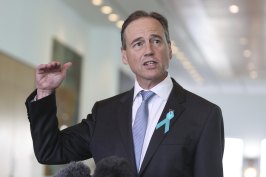 Federal Health Minister Greg Hunt said the vaccine rollout in aged care was going well, despite the provider contracted to deliver the vaccine in NSW and Queensland admitting it was behind schedule.Credit:Alex Ellinghausen

Health Minister Greg Hunt revealed just 26 aged care homes had received vaccines in the first two days of the rollout despite more than 240 scheduled to get them by the end of the week.

Further investigations into the Queensland vaccination error, where an 88-year-old man and 94-year-old woman were administered at least double doses of the Pfizer COVID-19 vaccine, found the doctor had not completed the compulsory online training.

The doctor’s employer Healthcare Australia could stand to lose its contract if further issues occur and the Department of Health is double-checking whether all contracted healthcare workers have completed the vaccine training. 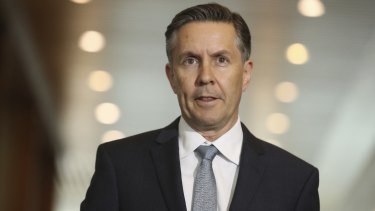 Opposition health spokesman Mark Butler said information about difficulties with multidose vials has been around for months.Credit:Alex Ellinghausen

“Nobody in Australia that gives vaccines at the moment is experienced with multi-dose vials,” Professor Murphy told a parliamentary committee in early February.

“I don’t know what desert island you will have been on not to know that these Pfizer vaccines were being delivered in multi-dose vials,” he said.

“A casual observer of the debate around this over the last several weeks would have known that, we’ve known because we have no experience of multi-dose vials in Australia.”

In the first week of phase 1a of the vaccine rollout, 30,000 Pfizer doses were meant to be distributed to 190 towns for private healthcare providers to immunise residents of 240 homes. Healthcare Australia is providing vaccination services to aged care facilities in NSW and Queensland, while Aspen Medical is doing the same in Victoria, Western Australia, Tasmania, South Australia and the ACT.

Healthcare Australia said the company would not finish vaccinating residents in NSW and Queensland facilities that were meant to be done by Friday.

“We haven’t met that list, but we aim to make it up,” a spokesman said.

Last week Mr Hunt and Professor Murphy were confident the 183,000 aged care residents in 2600 homes would be vaccinated within six weeks.

“It is OK to take four or five weeks to vaccinate all the aged care residents,” Professor Murphy said at the time.

On Wednesday morning, Mr Hunt said the rollout was going well so far.

“I’m actually very happy with how this is going,” he said.

But aged care providers said the rollout had already not gone to plan.

Peninsula Villages chief executive Shane Neaves said staff in their Central Coast facility worked hard over the weekend to prepare the 300 residents for their first day of vaccinations. They were due to start at 8am on Tuesday but cancelled at the last minute.

“The residents are very disappointed,” he said.

BaptistCare’s Bangor residents in Sydney were vaccinated on Wednesday, a spokesperson said, and its facility at Point Clare on the NSW Central Coast was scheduled for Thursday. But the operator has received no information about its remaining centres, including one in Wagga Wagga, which was on the federal government’s list of locations due to receive their vaccine this week.

Other large aged care operators with facilities in locations on the list had not received information about when their vaccinations would occur, or been told if their doses were weeks or months away.

The Healthcare Australia spokesman said the complexity of the rollout meant there needed to be “flexibility” and the company was still recruiting immunisation nurses.

“We are improving the efficiency of our program based on what we are learning about how long things take,” he said.

Mr Butler questioned how the government would vaccinate residents in more than 200 facilities before the end of the week.

“Almost 90 per cent of aged care homes that thought they would get the vaccine this week have not received it and we’re mid-week,” he said.

A spokesman for the federal Department of Health said data on the number of aged care residents that have been vaccinated is being collected and will be given to states and territories along with vaccination plans for coming weeks.