Ahead of tonight's events, remember the Met Gala's most iconic outfits 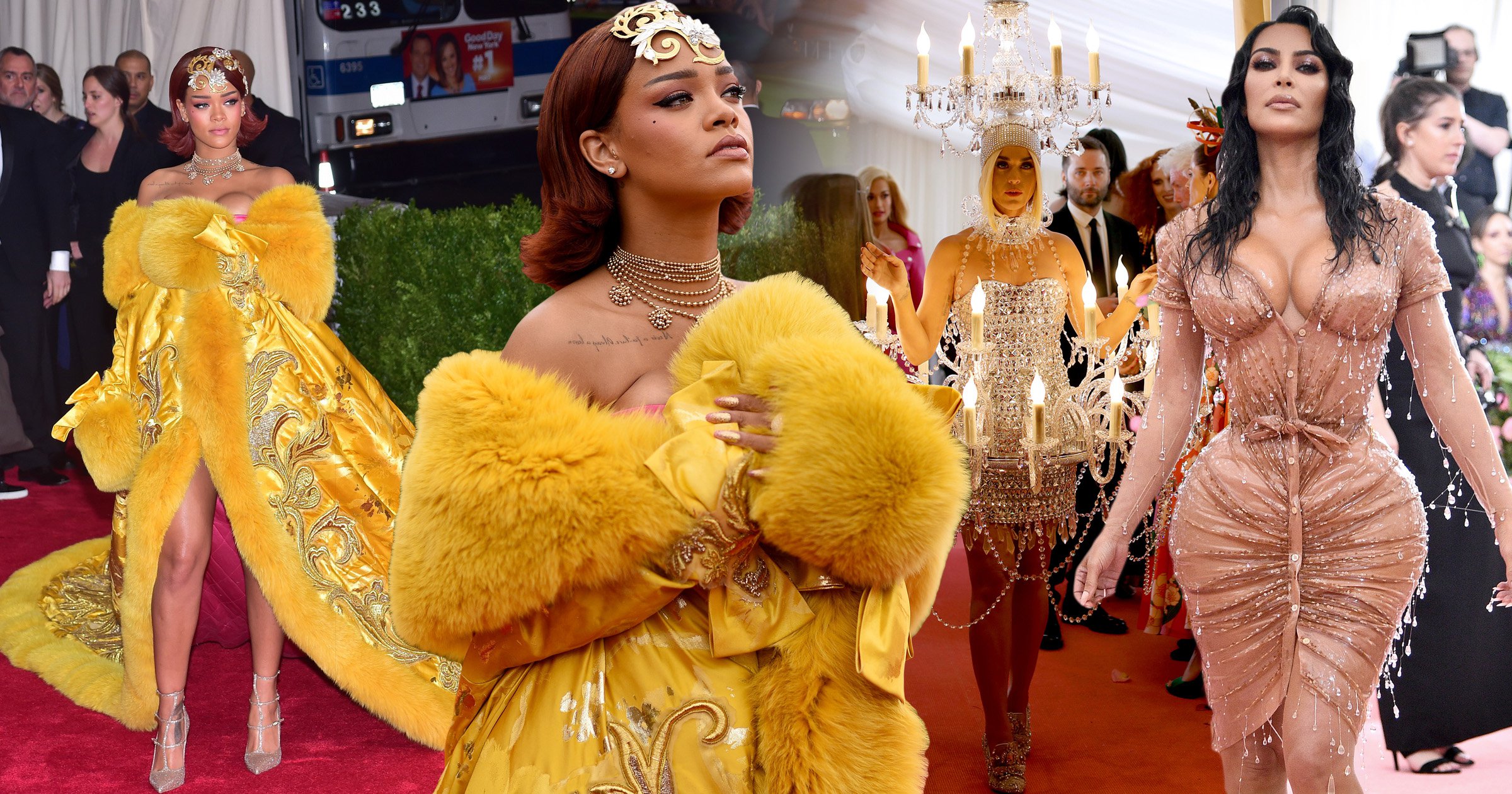 We’ve had a year and a half of pyjamas to the ‘office’, we have abandoned non-elasticated waistbands, and our heels are gathering dust under our beds.

But tonight, New York will truly bring fashion back into our living rooms – not counting those black tie Zoom quizzes we dolled up for – as the Met Gala returns.

After a year off in 2020 due to the pandemic, style and showbiz’s most fashion forward figures will  be celebrating fashion made in the USA, as part of the theme ‘In America: A Lexicon of Fashion’.

The scope is pretty broad here for celebs to interpret the theme – not that they always stick to the theme anyway – so we’ll have to wait and see what they have in store for us.

But until the red carpet opens, we can reminisce on some of the most memorable, daring and drop dead gorgeous looks in Met Gala history.

From camp classics to dresses that took literal years to create, here’s the outfits that we can’t get out of our heads years later.

Rihanna at China: Through The Looking Glass (2015)

If there’s one celeb that sums up the Met Gala, it’s Rihanna.

The Fenty mogul never misses, whether it’s looking like a rose bush in tribute to COMME des GARÇONS‘ Rei Kawakubo, or wearing a papal hat to commit to the Heavenly Bodies theme.

But it was her 2015 look for the China: Through The Looking Glass event that reigns supreme.

As well as being a walking work of art, the look also delivered the memes in abundance, with Rihanna’s train doubling for an omelette and a pizza thanks to Twitter.

Kim has also had many standout looks at the Met Gala – an honourable mention goes to that floral dress and gloves.  she wore on her first appearance.

However, she reached peak Kardashian fashion at the 2019 Met Gala, when she chose to interpret ‘Camp: Notes on Fashion’ with this jaw-dropping silicone dress from Thierry Mugler.

The nude dress took eight months to make and was covered with dripping crystals to make Kim look like she’d emerged from the ocean.

Underneath the dress, Kim wore a couture corset from Mr Pearl, which left her unable to pee or and with indentations all over her stomach and back.

Chadwick Boseman at Heavenly Bodies: Fashion and the Catholic Imagination (2018)

Often the attention at the Met Gala stays on the women, but every so often, a man steps up and fits the brief to a tee.

The late Chadwick Boseman showed off his impeccable style at the Heavenly Bodies: Fashion and the Catholic Imagination event, wearing a white cape from Versace, adorned with gold crosses.

By far one of the best male looks we’ve seen at the Met Gala.

Making sure the party was lit – literally – at the 2019 event, Katy arrived dressed as an actual chandelier in a custom look from Moschino.

The crystal embellished dress featured a chandelier that floated around Katy’s waist, plus an intricate headpiece that must have been a nightmare to carry.

Beyonce at China: Through The Looking Glass (2015)

Beyonce was a late arrival to the China: Through The Looking Glass event, but who needs to be on time when you a) are Beyonce and b) look this good?

While the dress wasn’t really on theme, Bey dazzled in a ‘naked dress’ from Givenchy that featured expertly placed green, white and pink crystals embellished on a form-fitting sheer dress.

Beyonce made sure to work her angles like the pro that she is on those red steps.

While the Met Gala may have been ramped up in attendance and star power over the past decade, it’s been known as the jewel in NYC’s social crown since the 70s.

And in 1974, Cher proved she was – and is – the queen of glamour, as she wore an iconic Bob Mackie dress to the event themed Romantic and Glamorous Hollywood Design.

The look – a sheer beaded gown with white feathered sleeves and a matching feathered skirt – became one of the most famous naked dresses of all time, and Cher later wore the dress on the cover of Time magazine.

Pose star Billy Porter always makes a splash on the red carpet, and he ensured that in 2019 when he was carried into the Met Gala by six shirtless men in a nod to Ancient Egypt.

While that would have been enough to land him on this list, Billy then revealed his Sun God ensemble, custom made by The Blonds, which featured a bejewelled catsuit, a 24-karat gold headpiece, gold leaf Giuseppe Zanotti shoes, jewels from Andreoli, John Hardy and Oscar Heyman, and, most importantly, 10 foot wings.

Lady Gaga was one of the chairs of Camp: Notes on Fashion, so based on that, and the fact she is Lady Gaga, we knew that she would be extra AF.

She didn’t disappoint, as before she’d even gone into the event, Gaga had changed her outfit four times.

Under that was a pink column gown… and under that, came black underwear and fishnets, which Gaga modelled while pushing a Haus of Gaga drinks trolley.

You can’t have a New York fashion event without SJP, and her finest moment came in 2014 at Charles James: Beyond Fashion.

She gave a nod to James’s style in a stunning Oscar de la Renta gown with a black criss-cross design on the train to embody a dress form.

In case you didn’t know who she was wearing, the designer’s name was embroidered on the train in red cursive.

You can wear a pretty dress or stylish suit to any event, but the Met Gala gives celebs a chance to get truly weird.

So we tip our hats to Jared Leto, who attended the 2019 event carrying a replica of his own head.

A callback to Gucci’s very creepy 2018 show where models carried their decapitated heads, Jared’s head rocked the same luscious long hair, and was passed around the other guests throughout the night.

Jared didn’t scrimp on his look, either, wearing a regal red suit from Gucci, draped with jewels.