American Horror Stories Asks Which Is Worse, Slasher Santa or Influencers And Their Fans?

As we’ve seen with several actual influencers in recent years, sometimes chasing that almighty follower count can cause some of them to lose their sense of decency. Only in Ryan Murphy and Brad Falchuk’s “AHS” world, such behavior comes with greater consequences than losing precious followers.

In the case of the Bro House, Barry’s protests tended to fall on deaf ears. But he also never stood his ground. He pushed back against imbecilic leader Zinn’s (Nico Greetham) great idea to film a guy committing suicide — but he still filmed it AND edited it AND uploaded it.

All those protests mean nothing if you keep on supporting the bad behavior. When that move started costing them subscribers, they came up with an even worse idea, homo-ing up their channel with “no homo” content.

At this point, it was clear that these guys are absolute idiots because even the content we saw was beyond stupid, and it quickly made them a laughing stock, still shedding followers. And so, Barry suggested they go back to their more innocent, fun-loving, pranking roots.

This is clearly a statement on how so many influencers feel this need to become more extreme, more dangerous, edgy, obnoxious, whatever so long as it’s more in order to feed the insatiable appetite of their followers and potential followers.

This is where Murphy’s commentary on influencer culture expands beyond the influencers themselves — but we’ll get to that in a moment.

The plan to go back to playful, fun content takes a left turn when they crash a Santa-at-the-mall scene and Zinn again chooses awful. He sexually harasses a young woman working as an elf, taunts a little person working as an elf and then starts giving Santa a lap dance.

But that’s where he made his mistake. We all know Danny Trejo is an absolutely sweetheart of a man, but is there ever better casting than him as someone who can be menacing with one look, or one snarled line. Dude had us scared from this side of the screen!

Zinn told the kids that Santa wasn’t real, and here again Barry whined and complained and resisted but nevertheless edited and uploaded the video. He may be slightly more humane (human?) than his compatriots, but he’s just as complicit.

Sarah Paulson Doesn't Care for This American Horror Story Season at All, Felt 'Trapped' to Do It

Perhaps that’s why he’s not left off the hook when it becomes clear that Trejo’s Santa actually murdered the real mall Santa, taking his place. We never really learn why he does this in general, but maybe it’s to punish the “naughty.”

But this wasn’t just generalized slashing like you’d seen in a “Friday the 13th” or even a “Scream” film, this was tailored specifically to the Bro House. Not only did Santa film himself brutally and creatively murdering the boys one by one, he somehow managed to hack into their account and upload each video.

Remember when I said we’d get back to Murphy’s commentary on influencer culture. With each brutal death video, the Bro House saw their subscriber content spiking. Granted many thought this was great special effects, but the bottom line is that the graphic and brutal deaths of the Bro House boys was driving subscriber counts up.

One by one, Barry’s boys were dispatched until only Barry was left, shot through the leg with a candy cane arrow. He dragged himself into the house where Santa poured gasoline down the chimney.

Barry tried to cry for help in the comments of their page, but the fans didn’t take him seriously. It’s all just content. After all, are influencers real people or just entertainment? They’re content providers, and so they are content themselves. 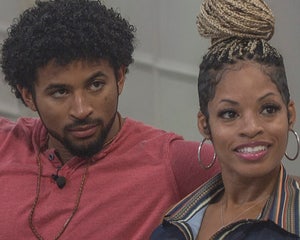 This is why their awful behavior is not just allowed and accepted, but applauded and rewarded. No one is rewarding actual people for being terrible and doing cruel and insensitive things because they’re not really people anymore, right?

They’ve been reduced to content creators fueling monetization for their sponsors. Morality and conscience play no role in that transactional relationship. They’ve given up their souls and their humanity because that’s what the people want.

As if to drive home that point, Murphy’s “final girl,” Barry, had a chance to try and escape the flames but couldn’t when his laptop revealed that they’d finally achieved their 5 million subscriber goal.

Barry sat there staring at the screen, crowing triumphantly to his dead friends that they’d finally done it as Trejo’s Santa dropped the match that would set him ablaze. Even Barry’s self-preservation instinct was overridden by that need for fame, for one more follower … or 5 million of them.

There was nothing particularly innovative or brilliant about this episode, as it followed a predictably straightforward path. The players were basically caricatures of desperate fame-seeking influencers (we hope they’re caricatures) and the slasher horror tropes were on full display.

We quickly learned that our “heroes” were terrible people, and they were taken out one by one through elaborate holiday-themed methods. Zinn didn’t have to be tied up in Christmas lights and thrown into the pool to be electrocuted, but it was more dramatic that way.

The only thing we’d have appreciated was a better balance between the time spent on the awful content they were creating and the time spent on them all being murdered by Trejo. They could have easily cut out the entire “no homo” sequence to spend a little more time on the murders themselves, building greater tension and mystery for Barry as his friends get taken out one by one.

Luckily, Murphy has never been ashamed to wear his love of horror clichés on his sleeve, and in his scripts, as this whole franchise is his love letter to the genre, warts and all. This was a fun love letter, satisfying in that the horrible people did get what was coming to them. We’d have just enjoyed savoring it a little more.

Maybe horror fans aren’t much different than influencer followers, after all — except that horror fans are watching fiction and not someone’s real life destroying other people’s real lives.