Both give every sign of believing in an imminent future where bureaucracy has gone crazy in its willingness to sacrifice individual rights to that false god, organisational efficiency. 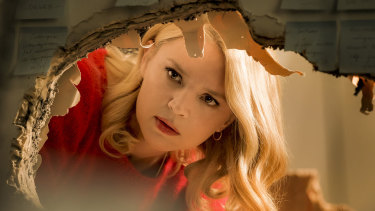 Virginie Efira plays a hairdresser who has just learned she is about to die.

Gilliam laid it all out in Brazil (1985), his absurdist look at the lengths to which a society might go in its efforts to get its citizens to toe the line and it’s clear Dupontel has taken the film’s lessons to heart. You could read Bye, Bye, Morons as an update, sharing the same anarchic spirit and sense of the ridiculous.

It also demonstrates a healthy respect for the power of coincidence. When we first meet them, Suze Trappet (Virginie Efira) and Jean-Baptiste Cuchas – played by Dupontel – are unlikely allies. She’s a hairdresser who has just received the grim news that she’s about to die from an auto-immune disease contracted through the sprays she uses in her work. He’s a civil servant who has been abruptly retrenched despite his technological brilliance because the boss wants to be surrounded by fresher faces. As a final insult, he’ll be required to train these tyros before he goes.

It’s all too much. He decides on suicide but his skill with a gun fails to match his IT talents and he survives while accidentally shooting up the office.

He’s now on the run and right on cue, his wanderings lead him to Suze, who’s embarked on a quest. She’s searching for the child she was forced to give up for adoption when she was 15 and Jean-Baptiste’s ability to find the key to any public records portal is going to be an enormous help.

Dupontel has fashioned the adventures that follow into a screwball comedy for the digital age, except that Hollywood screwball existed in a light-filled black-and-white world, looking as if it had been designed by an optimist. In contrast, Dupontel, like Gilliam, favours the sharp-edged gloom that pervades film noir.

Suze and Jean-Baptiste work mainly by night, aided by a blind archivist, who has been interred by his bosses at the bottom of a dark and lonely corridor in Public Records.

As you can tell from this touch of comic exaggeration, Dupontel doesn’t have much time for comedy’s finer lines. Broad strokes describe his style, which means it errs on the sloppy side. But he’s a surprisingly subtle actor and Jean-Baptiste’s make-over from nervy company man into increasingly confident swashbuckler is managed with great aplomb.

The film has appealed to the French propensity for sticking it to authority. A box-office hit, it’s also won seven Cesars, including Best Picture and Best Director.