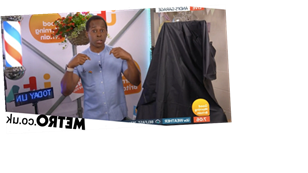 Good Morning Britain’s Andi Peters issued an important message to black children watching the show, as he opened up about the Black Lives Matter movement.

After a discussion on the show, Andi began his competition segment with a statement about the movement.

He said: ‘I just want to say something as I can as one of the only black people on this show it is so important that we all keep talking.

‘It really is. People meet me in the street and ask me how I feel about it.

‘We’ve all started this conversation and one of the best things about Good Morning Britain is that we talk about it – we’re not brushing it under the rug, we’re not tip-toeing around, we are talking about it.

‘Every day on this programme we talking about it and it’s really important that we do.’

He then directed a message towards any black children who might be watching.

‘Every black kid watching right now – you could do this job,’ he said.

It’s not the first time Andi’s opened up about the issue, after he previously reminded Piers Morgan that he’s the only person of colour in the entire GMB studio.

Andi, who has been presenting for over 30 years, explained: ‘This whole issue of diversity at the Baftas which is also going to hit the Oscars. For years, Bafta have been announcing “we’re going to be more diverse” the movie industry is my more diverse.

‘And yet the award nominations come out for Bafta, all 20 acting awards are for white people. And on the director front, not a single woman. What is going wrong?

‘I think fundamentally there aren’t enough people of colour working in our industry. That’s a fact.’

He added: ‘Am I, or am I not the only person of colour standing in this studio right now? Yes. I am.’