Arnold Schwarzenegger, 74, Is In The Best Shape Of His Life Riding A Bike In L.A. Photos

More than fifty years after first winning Mr. Olympia, Arnold Schwarzenegger continued to stay in world-class shape by hopping on his bike for a ride through the streets of Los Angeles.

In 1970, a then-23-year-old Arnold Schwarzenegger began his impressive Mr. Olympia winning streak, taking 1st in the bodybuilding competition until 1975. Now, more than half a century later, Arnold, 74, kept up his fitness journey by breaking out his bike. The action movie icon and former Governor of California went for a ride on Saturday (July 31) along with two friends. Arnold flashed a smile as he and his biking buddies made their trek down the road. Arnold kept warm with a puffy Patagonia jacket, work over a black t-shirt, and a pair of exercise shorts. 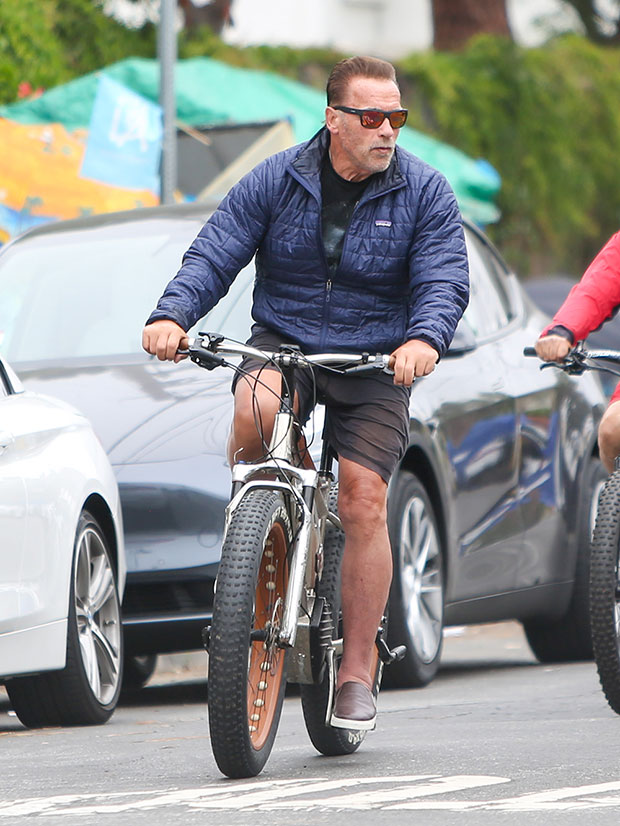 Arnold celebrated his 74th birthday on Friday (July 30). To celebrate, Arnold’s son – and frequent biking bud — Joseph Baena, 23, celebrated by posting a picture of him alongside his father. “Happy Birthday, Dad! I hope your pump was juicy, and may your day be filled with lots of schnitzels, schnapps, and stogies,” he captioned the Instagram pic. In it, the two are toasting, with Arnold appearing to have a green juice in his glass. Joseph also wore a “Bar-Barian” t-shirt, a parody design influenced by Arnold’s movie, Conan The Barbarian. Joseph has helped his dad stay in shape – and vice-versa – by working out alongside Arnold. 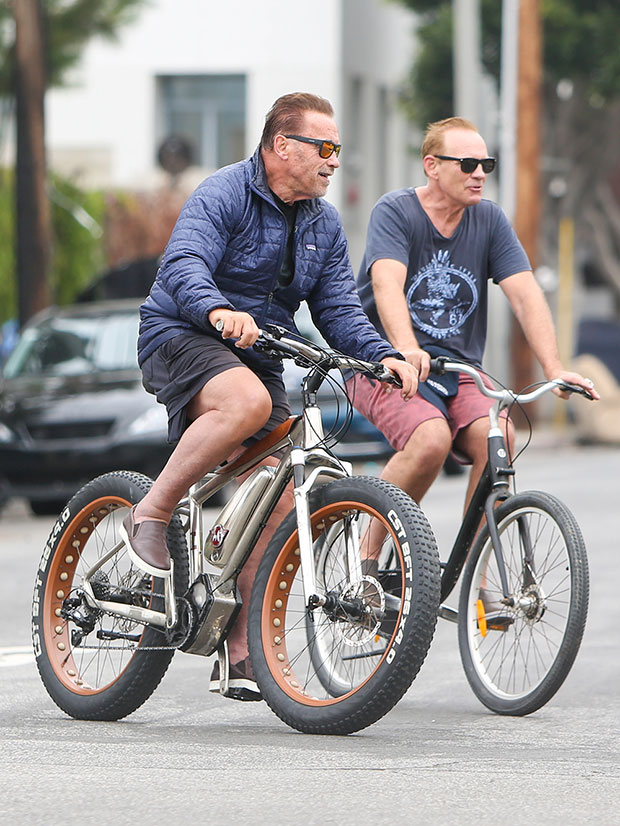 “This selfie was taken moments before my dad suggested I do ‘forced reps’ for the rest of the workout,” Joseph captioned a May 21 selfie with Arnold. “You have to go all out and absolutely NO cheating when you train with him, so you know I’m going to be hurting tomorrow. Overloading on the rows, bench press, pull downs, etc… thankfully, my studly training partner helped me get every last rep. This is another great approach to training and a fantastic way to build size and strength!

Joseph isn’t the only one of Arnold’s kids that has been hitting the gym. Christopher Schwarzenegger, the youngest son of Arnold and Maria Shriver, has kept himself out of the public eye, unlike his siblings Katherine Schwarzenegger, Christina Schwarzenegger, and  Patrick Schwarzenegger. So, when Christopher was spotted grabbing lunch in Beverly Hills at the start of July, it was a big deal – and what made it even bigger was how slimmed down he looked. Before this sighting, Chris was last seen out and about in 2018. Christopher in 2021 looked like he dropped some serious weight – and he looked really good!