As China Bans Oscars Broadcast, ‘Do Not Split’ Proves the Power of Short Film — Watch

Filmmaker Anders Hammer braved tear gas, rubber bullets, live rounds, and pepper spray to shoot “Do Not Split,” a riveting 36-minute documentary that puts viewers on the front lines of Hong Kong’s pro-Democracy protests. Given that, he’s not afraid of a little censorship.

Produced by Field of Vision, the agit-prop non-fiction film company co-founded by “Citizenfour” director Laura Poitras, “Do Not Split” captures the Hong Kong demonstrations from 2019 through the developments of 2020 with terrifying immediacy. It’s impossible to look away as protestors face beatings, surveillance, and arrests for exercising the right to assembly and free speech. It’s no wonder the film’s Oscar nomination has Beijing on high alert.

Days after the Oscar nominations were announced on March 15, reports surfaced that the Chinese Central Government had instructed local media “not to transmit live coverage and to downplay the awards coverage.” The order allegedly came from the propaganda department of the Chinese Communist Party. In a disappointing turn of events symbolizing the worsening situation over the last year, Hong Kong broadcaster TVB this week announced it would not air the Oscars for the first time in 50 years. The decision is likely also based on the “Do Not Split” nomination, as well as pro-democracy statements attributed to Oscar-nominated “Nomadland” director Chloé Zhao.

After premiering a 20-minute cut of the film at Sundance in early 2020, Hammer returned to Hong Kong last summer to capture the evolving situation. As the pandemic made large gatherings more dangerous, Beijing implemented a draconian national security law that grants the Chinese Central Government carte blanche to crack down on a variety of political activity in Hong Kong.

“This has been a very dark period for Hong Kong,” said Hammer. “More than 50 activists and local politicians were arrested in early January. Two of the politicians you see in our documentary will be put on trial. They are now in prison waiting for the trials to start, but they are risking life imprisonment.”

Though Hammer is dubious that an Oscar nomination could affect change in China, Joey Siu, a local student activist who appears in “Do Not Split,” sees the emotional value in international recognition.

“This has been very encouraging news to the people of Hong Kong,” she said. Since the implementation of the national security law last summer, “we no longer have the chance to participate in protests, demonstrations, and rallies, and we also are not allowed to express ourselves online, on social media platforms, so we are having a very hard time struggling to find another way to continue to protest.”

The Norwegian director/journalist has forged a career making the social-activist human-rights short documentaries that have become synonymous with Field of Vision. When the Hong Kong protests first broke out in 2019, he saw “a very concrete fight for democracy,” he said. “I thought that if I could contribute in any way, it would be to go as close as possible and try to capture the intensity of what was happening.”

From opening with a small group setting fire to a bank to hiding out on a roof as helicopters hover overhead, “Do Not Split” captures the fraught tensions of the moment. Hammer “wanted to make a very physical and intense movie,” he said. So much so that it was tough for Siu to face.

“When it first came out, I dared not watch the whole thing, because it was really hard for me to again go through all the protest demonstrations and all the emotions I had when I was in Hong Kong,” she said.

Having embedded with anti-ISIS combatants in Iraq, followed a Syrian refugee crossing the Macedonian border, and interviewed Taliban leaders in Afghanistan, Hammer has honed his camera and audio set-up to be as durable and mobile as possible in times of crisis.

“From those situations, I have been experimenting with how to film in a very physical way,” he said. “I have a backpack, lots of batteries and memory cards. Then I have a quite small camera and just the sound system and everything is on my body so I can move and I can run and I can film all time.” 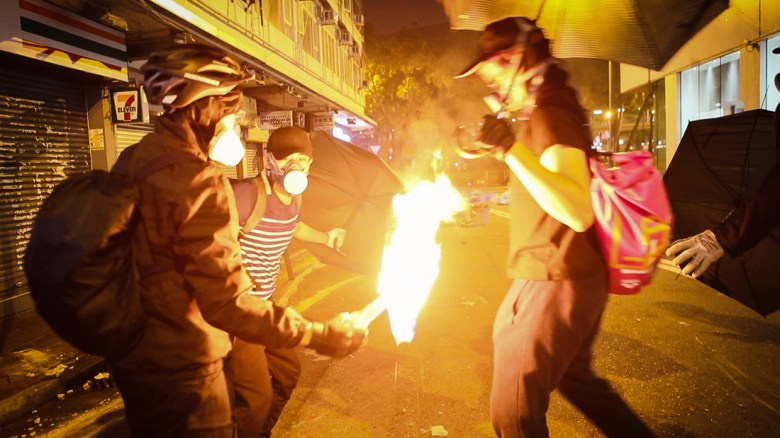 Courtesy of Field of Vision/Anders Hammer

To shoot the high-impact scenes in “Do Not Split,” Hammer used a still camera with video capabilities, the Canon X Mark II, which he calls “very robust.” He used only a small microphone on top of the camera, and wore his zoom recorder across his body, which was protected from teargas in a small plastic case he designed.

Editing down 140 days of recorded footage to 36 minutes of film was another challenge, but Hammer always knew “Do Not Split” needed to be a short. “I like the power of short documentaries, and that’s what Field of Vision specializes in,” he said. “[It] works really well online. I think more people tend to watch a short documentary, which is published in a way we try to make it accessible. It’s open for anyone to watch now. You do not have to pay to watch ‘Do Not Split.’”

Though she’s optimistic about the film’s Oscar nomination, Siu was not at all surprised by the Chinese Central Government’s decision to censor the Oscars broadcast. “The Chinese Central Party is willing to do whatever they can to prevent this information that could potentially harm the stability of mainland China from getting into the country,” she said. “So they’re not afraid of sacrificing their reputation when it comes to interactions with the international community.”

As the situation deteriorates in Hong Kong, “Do Not Split” serves as a vital document of a rapidly closing window for democracy there. “Freedom of assembly and freedom of expression is just disappearing by the day,” said Hammer. “This movie is about that situation, which is still ongoing.”