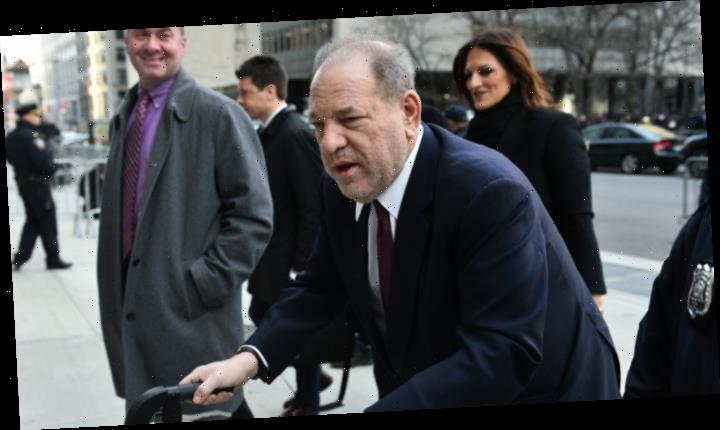 Dawn Dunning, a former waitress and aspiring actress who claims Harvey Weinstein sexually assaulted her in 2004, tearfully testified in Manhattan Supreme Court about how the media mogul propositioned her and stuck his hand up her skirt during a business meeting.

After initially meeting Weinstein at a nightclub in the Meatpacking District in New York City where she worked as a cocktail waitress, Dunning said Weinstein offered to help her with her acting career, so he called for a meeting in a hotel room. Dunning said she had no reason to believe the meeting would be anything but business-related.

Weinstein lured her into a bedroom at the boutique hotel in Soho, Dunning said on the stand, to discuss possible roles she might play in upcoming films for Miramax, the indie label that Weinstein ran at the time. Dunning said when she arrived to the hotel suite, about five staff members from Miramax were working on the laptops in the hotel room, so it seemed like a professional setting. Weinstein took Dunning into a separate bedroom in the suite, closed the door nearly all the way and sat down on the bed next to her to have a professional conversation, which Dunning said was not sexual in any way. “There were no red flags or alerts or anything that would make me expect this to happen,” she said.

Dunning alleged that while the two were sitting on a bed, discussing her acting career, Weinstein suddenly slid his hand up her leg and inserted it into her vagina.

“His hand went under my underwear. He was trying to put it in my vagina,” Dunning said, breaking down into tears. Asked by the Assistant District Attorney, “Did his finger actually go into your vagina?” Dunning cried and responded, “Slightly. Not all the way.”

“I stood up. I was shocked. I just wasn’t expecting that to happen,” Dunning said in court on Wednesday. “He just started talking really fast like, ‘It’s not a big deal, don’t make a big deal out of this.’ He said it wouldn’t happen again.”

Up until that meeting, Dunning said she was excited about the potential career opportunities that Weinstein offered her, including a screen-test at Miramax’s offices. “I was trying to get work from him, so [it was] like a work relationship,” Dunning testified. “Everyone that I knew knew that I was going to meetings with him and that I had a screen-test — it was a really big deal for me.”

After testifying about the hotel encounter when Weinstein allegedly put his hand up her skirt, Dunning then shared a second encounter with the producer, and said she convinced herself that if she told Weinstein she wanted their relationship to remain platonic, things could remain professional.

Dunning went to a second meeting at a different hotel because Weinstein’s assistant told her that it would take place at the hotel restaurant downstairs; not inside a hotel suite. When Dunning arrived to the hotel, the assistant was waiting to greet her downstairs, but said she would have to go upstairs to meet Weinstein, who was actually in a suite. The assistant escorted Dunning upstairs, and Weinstein opened the door wearing an open bathrobe. Dunning said he appeared to be naked and exposed under the robe. “He was very overweight and he had a large stomach that was hanging down,” she said.

“When he said that, I laughed,” Dunning said. “I thought he was kidding. He had kind of a crass sense of humor, but when I started laughing, he got really angry and started screaming at me like, ‘You’ll never make it in this business. This is how this industry works. The is how actresses got to where they are.’”

Weinstein then claimed Charlize Theron and Salma Hayek had exchanged sex for parts, according to Dunning.

“At that point, I was scared and I didn’t know what he was going to do,” said Dunning. “I literally ran out the hall to the elevator.” Dunning said she heard Weinstein screaming after her when she ran out, but she made it down the elevator, hopped into a cab and went home. “It was loud. He’s a large man. It was scary. It was very aggressive.”

Dunning claims she told many friends, but she did not go to the police because “I didn’t know what he did was illegal or a crime.”

After the second hotel incident, Dunning said she stopped pursuing her dreams to become a professional actress. “I stopped acting after that. I still did art projects with friends or small little things, but I stopped going on auditions,” she said. “I stopped really pursuing it in the way that I was.”

Dunning testified that when she saw an article about Weinstein in 2017 written by New York Times journalist Jodi Kantor, she cried when reading the piece and reached out to Kantor to thank her for publishing the story. After that, she spoke to the newspaper for an interview.

Attorneys for Weinstein tried to poke holes in Dunning’s claims, suggesting that Dunning was able to raise her profile by doing media interviews with the New York Times, CNN and other outlets. Weinstein’s attorney Arthur Aidala questioned why Dunning would agree to see Weinstein after the first hotel incident when he allegedly put his hand up her skirt, which she described as “horrendous.”

Weinstein’s attorney Aidala took issue with Dunning only revealing part of the allegations during her interviews, which he referred to as a “media tour,” and he went into a long line of questioning with the prosecutors repeatedly objecting and the judge shooting down Aidala’s questions.

As the cross-examination got heated, Weinstein, sitting at the defendant’s table, was starring intently at his lawyer, as he typically does in court when witnesses are cross-examined.

Weinstein is contending with five criminal charges, including rape and sexual assault. If convicted, he faces life in prison. Weinstein says any sexual encounters were consensual. During her testimony, Dunning became so emotional that at times it was difficult to make out her words.