Aussie foodie creates a pie WITHIN a pie oozing with cheesy

‘This is genius’: Inventive home cook creates a pie within a PIE – stuffing the crust with mini store-bought pastries and a chunk of cheddar cheese

A foodie who’s known for experimenting with random ingredients in his pie maker has created a ‘pie within a pie’ stuffed with oozing cheese.

Alo Baker, who’s a HitFM and Triple M radio announcer across Australia, has shared a now-viral TikTok video of himself baking a party pie inside a round sheet of puff pastry, topped with a big block of cheddar cheese and another layer of pastry.

‘A bunch of people kept saying “yo Alo, make a pie inside a pie”. I love party pies so I chucked a party pie in. It felt a little underwhelming, it felt like it wasn’t full enough like the pie would fill out,’ he said in the video.

‘So I thought I’d do a second one, and this time I chucked a full filthy wad of cheese on top to see how we’d go. So I’m making two this time.’ 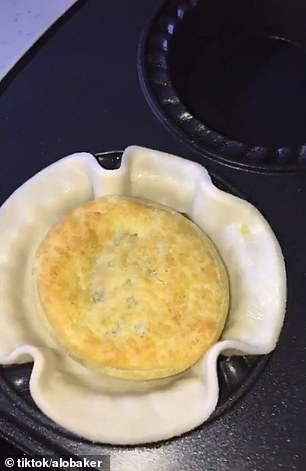 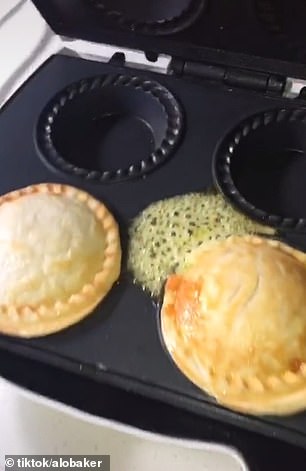 Once the pastries were baked until golden, he lifted the lid to find one pie with cheese oozing out.

He shared his verdict after tasting the ‘basic’ pie within a pie and the cheesy version.

‘As you’d expect, the standard pie in a pie tasted just like a pie with extra pastry,’ Alo said after taking a bite out of the basic pie.

Clearly impressed with the second option, Alo said: ‘The cheesy one, man this was a good one. This one did taste legitimately good – I’d have that again, definitely.’

His video has since been viewed more than 350,000 times, with many sharing their own ideas on what Alo should bake in his pie maker next.

‘Do it again with a party pie but add mince and cheese around it so it’s legit a pie in a pie,’ one suggested.

Another said: ‘Nah do it with tomato sauce instead of cheese and then it’s an auto sauced pie,’ while one added: ‘Put potato mash on top of the party pie like a shepherd’s pie.’

Alo has been documenting his food creations on TikTok where he has more than 55,000 followers.