Two million doses of the locally-produced AstraZeneca vaccine will be ready ahead of schedule, Health Minister Greg Hunt said, with CSL set to deliver them by the end of March.

Foreign Minister Marise Payne will go to the World Health Organisation with concerns over the European Union’s plans to add controls to vaccine exports from the region, which include vaccines from Pfizer and AstraZeneca. 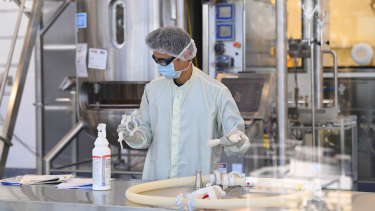 Scientists at work inside of the CSL Biotech facility in Melbourne. The first lot of vaccines from the facility will be delivered ahead of schedule, Health Minister Greg Hunt said.Credit:AAP

Despite the European issues, both companies reaffirmed they would begin delivering doses by the end of February, the Health Minister said.

“Australia remains on track for a late February commencement of the vaccine rollout,” he said.

While AstraZeneca is supplying an initial 1.2 million European-produced doses in the first few weeks of the vaccine rollout, the bulk of Australia’s vaccination capability will come from the AstraZeneca doses being manufactured in Melbourne by CSL.

“Having a sovereign vaccine manufacturing capability … and being well-prepared puts us in one of the strongest positions of any nation,” Mr Hunt said.

Minister Hunt said the first delivery of locally manufactured AstraZeneca vaccines, produced by CSL, will be earlier than expected.

“The first doses have been brought forward to an expected late March supply of approximately 1 million per week,” he said.

By the end of March, CSL will have provided approximately 2 million doses of the AstraZeneca vaccine, Mr Hunt said.

Both AstraZeneca and Pfizer have confirmed they will still deliver first doses of international supplies by late February, the minister said. Pfizer is set to begin delivering at least 80,000 doses per week to a total of 10 million throughout the year.

Australia also has an agreement to purchase 51 million doses of the Novavax vaccine, which has shown promising results in phase three trials, with 89.3 per cent efficacy in reducing COVID-19.

Despite assurances from the pharmaceutical companies about international vaccine deliveries, Mr Hunt said Ms Payne and the Department of Foreign Affairs and Trade will approach the World Health Organisation and other European agencies about ensuring Australia’s supply of vaccines was “guaranteed on a continuous basis”.

“We understand that the whole world has to deal with supply shortages and therefore our volumes have been appropriately set out this week, but the Foreign Minister has confirmed today that Australia will be making representations through the World Health Organisation and through Europe, with regards to ensuring vaccine supplies and certainty for Australia,” he said.