The Johnny Depp v. Amber Heard trial is currently at the center of a media frenzy. They are back in court to decide whether she truly libeled her husband back in 2018 after writing an op-ed. Depp alleges that Heard halted his career and destroyed his public image with false claims of domestic abuse. A body language expert breaks down the trial to determine who is being honest and who is lying.

The Behavioral Arts YouTube channel takes a look at the Depp v. Heard trial but recognizes this science’s shortcomings. There could be any number of reasons why an individual person’s body language is a certain way. Deceptive body language may not always indicate that a person is lying, but he explains that an amalgamation of clues could indicate who is more truthful.

This YouTube video seeks to stay impartial, not taking sides or accusing one side of being entirely wrong. However, The Behavioral Arts does have the goal of picking apart Heard and Depp’s body language to determine where they appear honest and where they are potentially fabricating their answers. 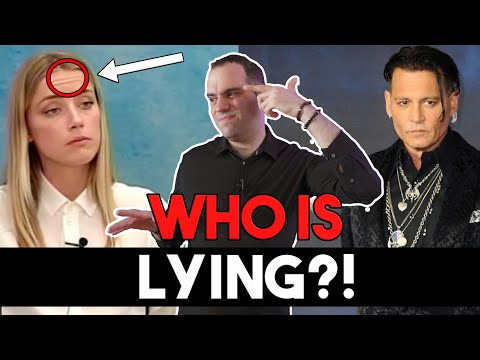 The Behavioral Arts begins with digging into Heard’s disposition in her trial against Depp. He explains that she frequently had “shifty eyes” when someone was talking to her. The most likely reason was a “condescending lack of interest.” The expert believes that it signals, “you are not important enough to hold my attention.”

Heard frequently had defensive body language, such as the aggressive way that she scratched her shoulder to where she nearly knocked off her microphone. Her lawyer’s objection to some of the questioning found Heard looking down, indicating that she was thinking about what to say next.

When asked about Depp, Heard frequently “turtles,” meaning that she “becomes smaller” like a turtle retreating into its shell to attract less attention. The expert explains that this is a defense mechanism when people feel insecure. Additionally, she shows signs of stress in the two places that would indicate her nervousness around the line of questioning surrounding striking Depp – her chin and her forehead.

Heard danced around Depp questioning, as she utilized what the expert calls “speech disfluency.” She frequently stumbled on her words and used a lot of “fluff” – words, such as “um” and “uh.” Most importantly, Heard didn’t answer the question being asked if she recalled ever agreeing that she hit Depp. The expert believes the actor had specific answers in her head for questions, but frequently “forgets her lines.”

However, the biggest concern in Heard’s body language was eye-fluttering and not remembering the parts of her body that were cut on a bottle allegedly thrown at her. Nevertheless, it’s clear that she became more passionate as the disposition went on. The expert emphasized that Heard minimizes some of her previously mentioned altercations to put further stress on others.

Heard alleged that Depp put his hand through a wall out of anger. However, the actor joked about how that would even be possible, as he told a different story of how he sustained a finger injury. There is a cluster of both truth and deception here.

Depp recalled a story of having his finger cut by Heard throwing a vodka bottle at him, but his big pause before telling the story is concerning. Nevertheless, it’s normal for pauses as the story progresses, as people try to piece together details from memory.

The expert noted deceptive behavior in a “condescending smirk,” “face touching,” and “grooming” – running his hand through his hair. He also frequently blocked his mouth.

The actor smirked at some of his own jokes, where the expert calls him a “charming storyteller.” He understands how to connect with his audience and build a vivid image. However, Depp also injected emotion into his retelling of the event that came across as “honest and raw.”

The expert believes that Depp “100%” punched a wall, but that he told the truth that he didn’t sustain this finger injury at this time.

The Behavioral Arts host sees both truth and deception in Depp and Heard’s testimonies. He noted that these are accomplished actors with experience that can’t be ignored. Nevertheless, there are some things that even the greatest actor cannot hide. Depp and Heard engaged in both honest and deceptive body language behavior in different portions of their answers.