The latest hit single from the South Korean boy group becomes the first song to land 100,000 domestic sales in five weeks on release since Luis Fonsi and Daddy Yankee’s ‘Despacito’.

AceShowbiz -BTS (Bangtan Boys) are still spreading the love with hit single “Butter” for a fifth week at the top of the U.S. pop charts.

The track debuted at number one on the Billboard Hot 100 last month (May 2021), and no one has been able to shift it.

“Butter” is just the 11th track to spend at least its first five weeks on the chart at number one.

The South Korean group, which is composed of Jin, Suga, J-Hope, RM, Jimin, V and Jungkook, celebrated their single’s latest feat with a thank you note to their fans, ARMY. Through their official Twitter account, the septet wrote, “FIVE weeks in a row!! #BTS_Butter is on the top of the chart again. It’s all thanks to #BTSARMY! AFBF.” 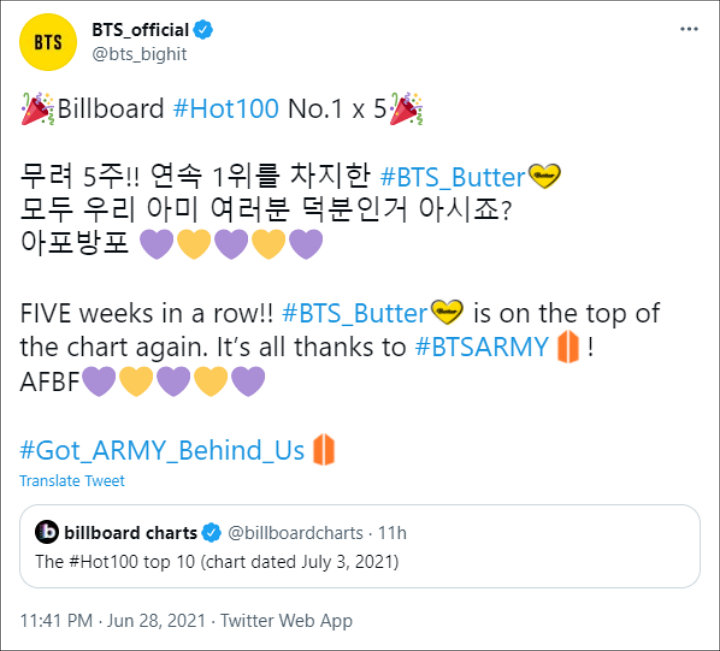 Back in May, band member Jimin and Jungkook talked about the meaning behind their hit song. ” ‘Butter’ is very simple,” Jungkook told Variety. “It’s getting warmer and will get hotter, and we hope that you can spend a fun summer with BTS.”

Jimin, on the other hand, elaborated, “If you hear the title ‘Butter,’ you know immediately that we tried to prepare a song that’s easy listening, instead of [something with] a really heavy or profound message.” He added, “This is a little embarrassing, but it’s something smooth like butter, that really melts into and grabs hold of you. It’s a very cute song, sort of a confession.”

Olivia Rodrigo‘s “Good 4 U” stays put at two on the new chart, while Dua Lipa‘s “Levitating”, Doja Cat‘s “Kiss Me More”, featuring SZA, and “Peaches” by Justin Bieber round out the top five.