Bragging about surviving the disease despite not being inoculated, the controversial political commentator claims, ‘I too am shocked that I survived those odds.’

AceShowbiz –Candace Owens has doubled down on her anti-vaccination stance after catching COVID-19. The conservative political activist has mocked vaccinated folks when revealing that she recently battled coronavirus.

The author took to her Twitter page on Sunday, January 16 to casually break the news that she had tested positive for COVID. Bragging about surviving the disease despite not being inoculated, she tweeted, “I would like to apologize to all of the people who are upset that I am unvaccinated and somehow survived covid.”

She further undermined the virus as she described it as “a disease with an approximate 99.87% survival rate for individuals under the age of 65.” She sarcastically said, “I too am shocked that I survived those odds,” before adding in a separate post, “Maybe I should buy a lottery ticket.” 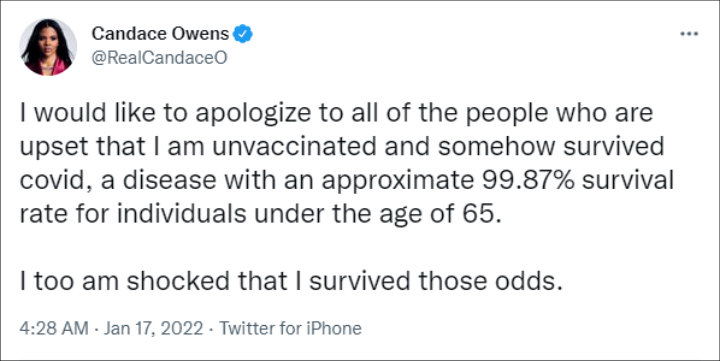 Needless to say, her tweet rubbed other users up the wrong way. One person called her out, “When did we stop caring about our elders? All lives matter, I thought? On Friday, two people between 25-44 died in Utah, so quite a few younger people are dying.”

Another sarcastically responded to Candace’s claims, “So comforting to the hundreds of thousands of families who lost someone. Just shhhhh.” Someone else explained the importance of the vaccines as writing, “Survival is not the only thing. There is Long Covid that is no joke and potential organ damage. Also 1 in 3000 children get multi systemic inflamation after recovering.and end up in hospital. Data is showing this.”

Candace has many times spoken up against COVID-19 vaccines. She even mocked Donald Trump who countered her anti-vax stance, saying he’s pro-COVID-19 vaccine because he’s too “old” to do better research.

“People oftentimes forget that, like, how old Trump is,” the 32-year-old said of the former president in a December 2021 Instagram post. “He comes from a generation — I’ve seen a lot of people who are older, have the exact same perspective, like, they came from a time before TV, before internet, before being able to conduct independent research.”

“And everything they read to them that was in a newspaper that was pitched to them,” Candace, who was a vocal supporter of the former reality TV star, went on explaining. “They believed that that was a reality.”