Chelsea Handler didn’t name the mystery man she’s smitten with, but her remarks came not long after she cozied up to comedian Jo Koy at a baseball game.

Chelsea Handler wants everyone to know that she’s “in love!” The 46-year-old comedian made that declaration on Monday, Sept. 20 in the Instagram caption of a photo that featured Chelsea in Mallorca, Spain. Chelsea didn’t divulge the identity of her mystery beau, but she did make it clear to her fans that she’s completely smitten with him.

“Just sitting here in Mallorca thinking about how grateful I am to have so many people that I love in my life, to live the life I do and to be going on tour doing what I love,” Chelsea said. “And that I’m finally in love, with the best kind of guy there is. There is hope for everyone! That kind of stuff,” she added.

After Chelsea proclaimed that she’s in a good place in life, many of her famous friends shared congratulatory messages on the update. “The best parts of life,” Reese Witherspoon said with a heart emoji, while Paris Hilton wrote, “So happy for you!” Game of Thrones actress Lena Headey told Chelsea, “Love all of this,” and Katie Couric added to the love by commenting, “Happy you’re happy,” with a big smiley face emoji.

Chelsea has yet to mention who exactly it is that she’s so enamored with, but all signs point to fellow comedian Jo Koy, 50. The pair sparked romance rumors on Aug. 31 when they cozied up to one another at the Los Angeles Dodgers game. Chelsea looked so happy as Jo lovingly wrapped his arms around her while the two watched the game. 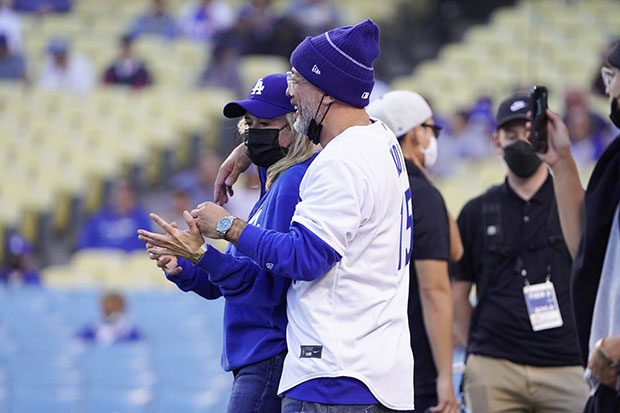 Jo was later asked about their relationship by TMZ on Sept. 10, and while he showered Chelsea with compliments, he didn’t confirm if the comedians are indeed dating. “How beautiful did she look that day? Me and Chelsea, she’s amazing,” Jo told the outlet. “I’ve known Chelsea for a long, long time, like years ago and we’ve always been great friends,” he added.

As Jo mentioned, he’s known Chelsea ever since he appeared as a frequent guest on her Chelsea Lately talk show, which aired on E! from 2007 to 2014. In April 2021, Jo told The Daily Beast that he actually turned down a full-time gig to work alongside Chelsea on the late-night show. “I didn’t want to be known as the sidekick. I knew if I took that on, I would be known as Chelsea Handler’s guy on the side,” Jo said.