Strictly Come Dancing fans saw Clara Amfo and Aljaz Skorjanec take on the Viennese Waltz to You Don’t Own Me. But within seconds of taking to the dancefloor, she suffered a wardrobe malfunction. Did you notice?

After they finished their dance, presenter Tess Daly commented: “You did so well to carry on then with your wardrobe malfunction.

“I noticed your dress got caught in your shoe, didn’t it?”

Tess continued: “And she carried on like a pro!” 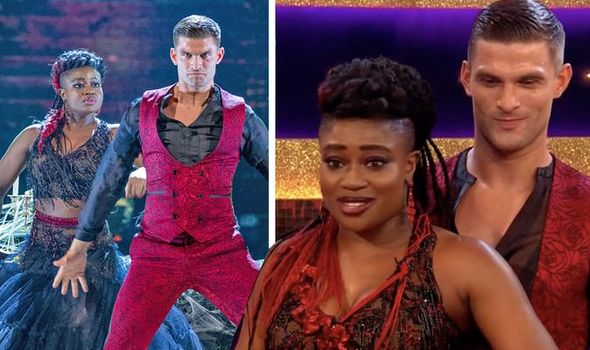 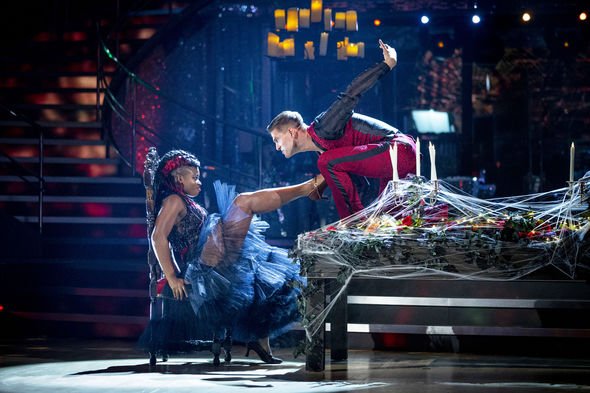 Tomorrow, one celebrity contestant and their professional dance partner will leave the competition.

After battling it out on the dance floor this evening, a public vote will open and the most popular will be saved.

The two with the least amount of votes will go head to head in a dance-off, and the judges will save who they think performed the best.

Who is set to leave the nation’s favourite dance show after just two weeks?

Strictly Come Dancing is airing on BBC One now.

Newsreader Natasha Kaplinsky was the first celebrity to win the BBC dancing series, which originally aired in July of 2004. She was partnered with Brendan Cole. They finished 39 points ahead of competitor Christopher Parker.

Jill Halfpenny was the second star to impress the judges with her dancing skills. Partnered with Darren Bennett, the pair beat off competition from Julian Clary and Denise Lewis in December of 2004.

Cricketer Darren Gough won the third series of Strictly. He and partner Lilia Kopylova wowed audiences but never once finished at the top of the leaderboard.

Mark Ramprakash was the fourth star to lift the Glitterball Trophy. He was partnered with Karen Hardy and they were the first couple to restart a routine after their initial attempt saw Mark’s mic get caught in Karen’s dress.

Before becoming a Strictly judge, Alesha Dixon won the nation’s hearts and the Glitterball Trophy during the fifth series. She was partnered with professional dancer Matthew Cutler.

Holby City star Tom Chambers was partnered with Camilla Dallerup when he won the sixth series. He performed the Foxtrot and Salsa in the final week.

BBC Breakfast presenter Chris Hollins and his professional partner Ola Jordan surprised viewers when they beat Ricky Whittle and his partner Natalie Lowe in the final. They wowed with the Foxtrot, Charleston, Lindy Hop and Showdance.

Kara Tointon was the eighth celebrity to win Strictly. She danced with Artem Chigvintsev and failed to receive 40 points throughout her time on the show.

Former McFly star Harry Judd was the ninth star to lift the Glitterball Trophy. He didn’t top the leaderboard until week seven but then scored 40 points twice in the final.

The tenth series of the BBC show was won by Olympian Louis Smith. He danced his way to victory with professional partner Flavia Cacace. He faced competition from Kimberley Walsh, Denise Van Outen and Danni Harmer in the series finale.

Love Island host Caroline Flack took to the dance floor in series 12 where she scooped the Glitterball Trophy with Pasha Kovalev.

Jay McGuiness surprised viewers when he won the thirteenth series of the BBC dancing competition with Aliona Vilani. When he learned he’d won, he told host Tess Daly: “I feel spaced out – it’s really weird.”

The sports presenter broke down in tears after beating Danny Mac and Louise Redknapp.

Documentary-maker Stacey fought off competition to make it to the Grand Final of Strictly Come Dancing with professional dance partner Kevin Clifton last year. When they won, Kevin described her as “the most wonderful person”.

Late to the Strictly Come Dancing party, Kelvin signed up after Jamie Laing was forced to pull out with an injury. But that didn’t stop the Emmerdale actor from dancing up a storm with professional partner Oti Mabuse.