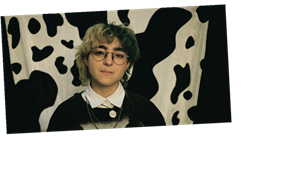 The New York-based 21-year-old has been making waves in the US and beyond since releasing an EP under the name Toast with best pal Joshua Mehling in the summer of 2018.

Now Claud is firmly en route for a stand out 2021 with Super Monster, the first release on Phoebe Bridgers’ label Saddest Factory.

If that’s not a stamp of approval, what is?

Armed with more than 50 songs after a focused writing period, Claud decamped to their dad’s house and whittled them down to 13 honest tracks that stay with you long after the first listen – from the enchanting synths on Ana to the indie pop bliss of Gold.

“I think that I'm super honest and transparent about how growth isn't linear and you shouldn't be so hard on yourself when you take a few steps backwards”, Claud told Daily Star.

Daily Star’s Rory McKeown caught up with Claud to talk about Super Monster, being in Toast, mixing at Electric Lady Studios, and what the future holds.

“Super Monster is sort of like a collection of songs that grew into one big project over the past two years or so. Last spring and summer, I really buckled down and finished the songs and production to be exactly how I wanted it to be, making it a more cohesive piece of work.”

What are the themes running through Super Monster?

“I think that I'm super honest and transparent about how growth isn't linear and you shouldn't be so hard on yourself when you take a few steps backwards.”

It was mixed at the iconic Electric Lady Studios in New York. Can you describe the experience?

“Mixing the record at Electric Lady was absolutely surreal. The history basically seeps through the walls there. It's such a special place and you can feel it when you're there.”

Is there a song on Super Monster you’re particularly proud of?

“I’m pretty proud of Ana because it's the only song on the album that isn't based off of my own lived experience.”

You're the first signing to Phoebe Bridgers’ Saddest Factory Records. What’s it like having Phoebe’s support?

“It's amazing! I feel super lucky and I trust her opinions and ideas so much.”

Can you remember the moment you wanted to become an artist?

You were part of Toast along with friend Joshua Mehling. What did you learn from that experience before going it alone?

“Josh helped me find my sound. Without him I still think I'd be pretty lost. I think there comes a time in a lot of artists careers when they come across that one person or band that influences and inspires them more than anything else, and that for me was meeting Josh.”

How has the pandemic impacted you as an artist? Has lockdown brought any challenges along the way?

“It's impacted me a lot, one of the biggest parts of being a musician is touring and socialising. I get inspired by meeting new people and new artists. Now I spend most of my time making music by myself.”

What’s next for you? Do you have an ultimate goal?

“After this album, another album! And another! And a world tour, and then a tour of outer space.”

Claud’s Super Monster is out now via Saddest Factory