During James’s Martin’s Saturday Morning, the TV chef did a cooking segment from Scotland where he demonstrated how to make a summer pudding. James had set up a cooking station in the middle of a small park and there were a number of people sat around watching on. Midway through the demo, James asked a guest who was sat beside him to whisk some cream for his dish. However, the celebrity chef appeared to be far from impressed by the guests’ lack of effort.

He began the cooking demonstration by mixing a combination of strawberries and raspberries into a bowl before decanting them into a bowl that was lined with slices of bread.

“Why I love doing shows like this [is] when you’re out and about in the countryside. It’s peaceful. It’s relaxing,” James said.

“The minute you get into town you see, everything gets a bit stressful.

“Now, I’ve got a load of tourists going, ‘Why is a guy dressed like he’s going to a wedding making a dessert for in the middle of a small park next to Granny’s green steps?’” 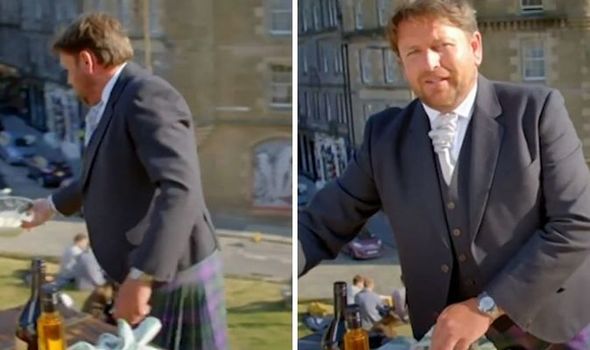 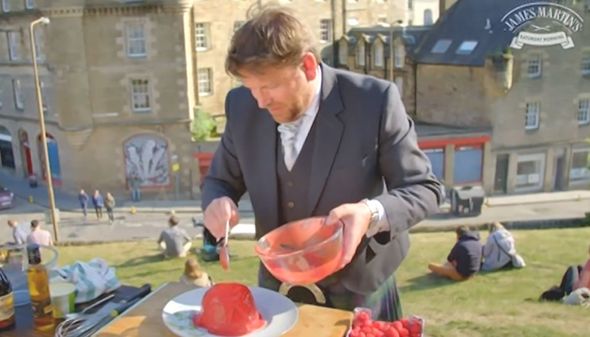 He continued to place bread on top of his berry mixture before wrapping it in cling film.

As he explained that the dish needed to go in the fridge to set, he brought one out that he had prepared earlier to serve up.

The 48-year-old turned it over onto the plate before decorating it with raspberries. 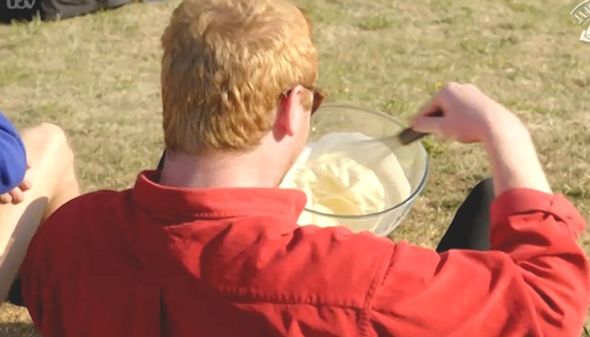 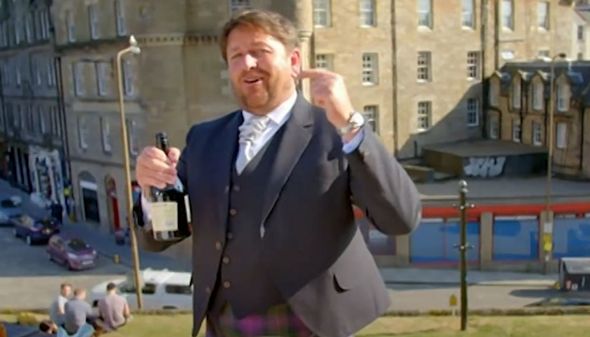 “If I had a stove, I would finish it off properly,” James added. “But what we’re going to use, is a bit of this, double cream.

“I’m going to venture back to that wonderful whiskey distillery. Now, this is off the charts.

“This is their creamed whisky. Delicious.”

As he began to whisk the whiskey and cream, James looked to his guests who were sat around him.

“You know what? There are far younger people around here,” James pointed out as he turned to one of his guests sat down on the grass.

“You’re sat there doing nothing, drinking your can of Lilt.”

“Just whisk it, go on,” the chef demanded.

“Come on, quicker than that. Come on.”

The guest appeared to give up on the whisking and passed it to his friend who was sat next to him.

As James laughed, he asked them: “So, what do you do for a living? Because you clearly don’t cook for yourself.”

As the guest replied: “Student,” James continued: “Are you just here to recover from a hangover, or what?”

“Come on you wimp,” he jokingly snapped. “That’ll do, that’ll do.

“We’ve got a nice bit of whipped cream.”

James Martin’s Saturday Kitchen returns on Saturday at 9.25am on ITV.