A federal inquiry into the office of Assistant Minister Michael Sukkar was outsourced to the law firm he used to work for, sparking questions over a conflict of interest in its findings.

The Finance Department chose national law firm Ashurst to run the review after revelations in August of branch-stacking and smear campaigns by Liberal Party operatives hired at taxpayer expense in electorate offices. 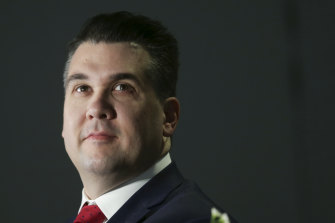 Michael Sukkar left the law firm in 2013, the year he entered Parliament by winning the Melbourne seat of Deakin.Credit:Alex Ellinghausen

Mr Sukkar worked at Ashurst under its previous name of Blake Dawson Waldron for seven years, rising to senior associate in its Melbourne office, before entering Parliament.

The law firm handed its review to the Finance Department last week with the conclusion there was “not a sufficient basis” to form a view about any serious misuse of money or resources.

It also found there was no evidence of a serious misuse of work expenses, with the same conclusions in a parallel review into the electorate office of former defence minister Kevin Andrews.

The government paid the law firm $50,000 for the two reviews but this masthead revealed last week the inquiries did not hear from key staff in the electorate offices.

Asked by this masthead about the choice of Ashurst, the Finance Department said all law firms had to undertake "appropriate conflict of interest identification and disclosure processes" in contracts with the Commonwealth.

"This was undertaken by Ashurst before they were engaged as an independent reviewer for each review," it said. "The reviewer undertook the reviews independently and in accordance with their ethical and professional duties as a legal practitioner."

While the department did not name the individual at Ashurst who led the inquiries, it said the reviewer joined Ashurst in 2018 and did not have any prior dealings on a professional or personal basis with Mr Sukkar.

Mr Sukkar left the law firm in 2013, the year he entered Parliament by winning the Melbourne seat of Deakin.

Ashurst said it followed its "usual processes" to identify conflicts in advance of accepting instructions from clients.

"We are confident that there is no bias or conflict of any kind, personal or professional, on the part of the firm or any of the individuals who worked on this matter," it said.

A spokesman for Mr Sukkar said questions about the review should go to the department.

"The minister's employment with Ashurst prior to entering Parliament has been publicly listed on the official Parliament House website and his personal website since his election," he said.

Mr Sukkar and Mr Andrews referred themselves to the department the day after the allegations were raised in this masthead on August 23.

"I wanted to ensure that those false allegations were treated and were dismissed, and they were by the Department of Finance," Mr Sukkar told ABC TV on Tuesday. "I was obviously very pleased with the outcome, I wasn't surprised by it."

Get our Morning & Evening Edition newsletters

The most important news, analysis and insights delivered to your inbox at the start and end of each day. Sign up to The Sydney Morning Herald’s newsletter here and The Age’s newsletter here.