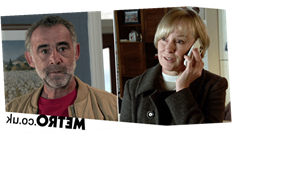 The wonder that is Sally Metcalfe (Sally Dynevor) in Coronation Street has been involved in some huge storylines over the years. She’s been a councillor, she’s been in prison, and she was furious when Geoff Metcalfe (Ian Bartholomew) smashed up her beloved chiminea a few months ago!

Sally is a staple of Weatherfield, and has recently revealed ex-producer Tony Wood came up with the idea for Sally and her ex-husband Kevin (Michael Le Vell) to leave the cobbles and go it alone in a new programme, but Sally has explained how she is very glad that never went ahead.

Talking on the ‘Soap From The Box’ podcast, Sally said: ‘there was talk of it. Tony Wood came up with the idea that we should leave the show and set up a new show. I’m so glad we didn’t. If it hadn’t gone very well, where would we be now?’

Sally continued, adding how she thinks it’s hugely important the writers keep Sally and Kevin as good friends in the soap, despite their previous split, because of all their history: ‘Michael and I are very close and Sally and Kevin were married for 25 years. They were happy for most of those years, so I love the fact the writers have made Sally still concerned about Kevin and vice versa.’

Sally has played her character since 1986, and recently admitted she feels proud of how many people’s lives Coronation Street, which celebrated its 60th anniversary on December 9th, has touched.

She added: ‘I’m so proud of Coronation Street. It’s just such an incredible programme to be part of. I was so happy to be involved in this domestic abuse storyline. It’s so important. When I watch montages of years gone by and all the stories we’ve covered over the years, I’m just so proud of this programme.

How many people’s lives this has touched – it’s incredible.’