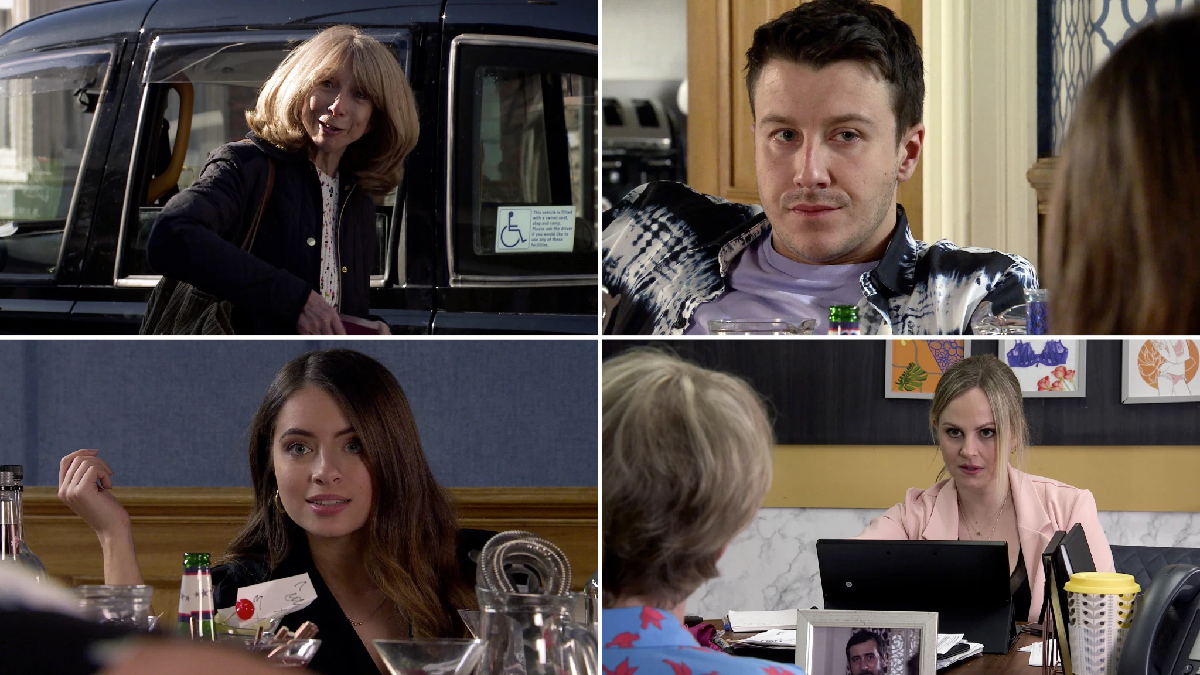 Elsewhere, Gail Rodwell (Helen Worth) has had enough of the family drama and heads off to Thailand again.

Paul finds Summer brooding in Victoria Garden. When Todd explains that she’s avoiding her diabetes appointment, Paul offers to go with her.

Summer thanks Paul for attending the appointment with her and confides in Billy how much she misses having him around. Todd, determined to prove Summer can trust him, returns home and proposes to Billy.

When Sarah facetimes Izzy to chase up some samples, she clocks a man in the background before Izzy kills the call. Carla meets up with Jo Lafoe and presents her with Izzy’s samples, but it’s soon clear they’re not up to standard and an embarrassed Carla assures her there has been a mix up.

Fiz tells Tyrone that he needs to tell the girls about the baby today and if he doesn’t, she will.

AAlya tells Ryan that Debbie’s looking for a trainee manager at the Bistro. Ryan agrees to apply for the job. Daisy tells Ryan that she knows a way for him to make money from his DJ-ing.

In The Rovers, Paul warns Billy that if he marries Todd, he’ll live to regret it. An ecstatic Billy and Todd announce that they’re engaged.

Summer hands Todd a letter she found on the porch. Todd opens it to read: ‘Don’t get too comfortable. Your lies will come out’.

Carla Facetimes Izzy and confronts her over her shoddy work. Carla tells Sarah that it’s time she was told to return to the factory. Sarah calls Izzy and tentatively suggests it might be good for her to return to work. Carla tells Sarah that the situation with Izzy is untenable and if she refuses to come back to work, they’ll have to get rid of her.

Tyrone and Alina break the news to Hope and Ruby that they’re going to have a little brother or sister.

Daisy and Ryan put a business proposal to Jenny, suggesting a mobile pub with DJ that the punters can hire and set up in their own gardens. Alya can’t help wondering if Daisy is after her boyfriend.

Natasha and Sam call at No.8 with a get well card for Gail. When Gail reveals that she’s off to Thailand tomorrow and doesn’t know when she’ll be back, Sam gets upset and rushes out.

Assuming the note to be from Paul, Todd warns him off. When Billy finds a helpline flyer with an abusive message scrawled on it, Todd explains that Paul’s behind it.

Billy sets off to have it out with Paul. Paul shows the flyer to Gemma and she reckons Todd’s hiding something.

Todd heads home to find a hooded figure about to break into their flat. Paul meets up with Ajay from the helpline and quizzes him about Todd.

Daisy and Ryan plan their promo party in Victoria Garden for Simon’s 18th birthday. Daisy instructs Alya to pay her friend a visit at the boutique in the precinct, as she’ll sort her out with a wow dress.

Alya arrives for the promo party but she’s gutted to see Daisy wearing exactly the same dress, convinced she has been set up.

Ryan returns home buzzing after the success of the party and singing Daisy’s praises. When Alya asserts that Daisy fancies him, Ryan leaps to her defence.

Sarah calls Izzy and makes it clear that they want her back at the factory. Suddenly Izzy announces that she’d like to resign from her job. Sarah tells Carla about Izzy’s sudden resignation.

Leanne calls at No.8 and begs Natasha to reconsider and let Nick be a part of Sam’s life for both their sakes. Natasha relents and tells Nick he can see Sam. Audrey, Nick, David and Shona wave Gail off as she leaves for Thailand.

Will approaches Summer and begs her to hear him out. Billy and Todd are in Speed Daal when Summer hurries in with Will in tow. Summer explains that it was Will who broke into the flat.

Billy forgives Will and offers to help him find somewhere to live. Realising Will means business, Todd tries but fails to secure a loan.

Paul’s shocked to find Summer in the café with Will. Paul confronts Billy, demanding to know why on earth he’d let Summer hang out with Will when he nearly got her killed.

When Ryan announces that Daisy has sorted him out with a DJ gig in Salford that evening, Alya takes the opportunity to confront Daisy. Later, Daisy tells Ryan about the confrontation.

Ryan’s gig gets cancelled, Daisy ushers Ryan into the back room and plies him with cocktails. Alya calls in The Rovers looking for Ryan. Daisy enjoys winding her up and keeps schtum about Ryan’s whereabouts.

Placing her hand on Ryan’s leg, Daisy wonders which cocktail he’d prefer, the naggy girlfriend or the night of wild passion.

Sarah assures Izzy that she needn’t worry as the deadline for the order is flexible. At the same time, Natasha’s impressed with Nick’s parenting skills and suggests that he and Sam should see more of each other.

Peter returns home from hospital. and George finds Eileen in the café and takes the opportunity to sing Sean’s praises. In the Rovers, Sean showers George in compliments. Eileen’s bemused.