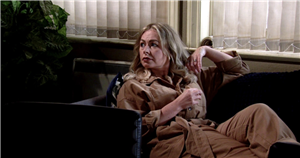 Pretty much anything can happen in soap land – even reappearing as a completely different character to the one you were originally cast as.

Eagle-eyed Coronation Street viewers may have thought there was something familiar about Kel Allen, who plays Kelly Neelan's (Millie Gibson) mum Laura, and they'd be right as she actually guest starred in the series back in 2018 as a different person.

Kel was first cast in Corrie as Lulu Lockett, the manager of strip club Tassels where Bethany Platt (Lucy Fallon) worked during her high-profile grooming storyline.

Now, she's back in a different guise as Laura, who has featured in the soap since last April but is at the centre of the Kelly storyline at the moment after being arrested on suspicion of child cruelty.

In Monday's episode, Corrie fans saw Laura looking stunned as the police caught up with her over her plot to sell her daughter's story to the papers, but was even more shocked to discover that it was Kelly herself who had reported her.

The mother and daughter have had a difficult relationship with Laura often prioritising new boyfriends over Kelly, but things hit a new low when she tried to cash in on Seb Franklin's (Harry Visinoni) murder.

Kelly is currently locked up awaiting the news of whether she will be convicted for Seb's murder and sent to prison.

She was with the gang that attacked Seb and girlfriend Nina Lucas (Mollie Gallagher) in May, killing Seb and landing Nina in hospital after taunting her about her goth appearance.

Corey Brent (Maximus Evans) actually delivered the fatal kick, but has been trying to frame Kelly for the murder even though she says that she tried to get the gang to stop the attack.

Kel previously told Digital Spy about being recast in the same soap just a couple of years after her first appearance.

She said that casting director Gennie Radcliffe had previously cast her as Lulu and then brought her back in for the role of Laura.

But while that may be surprising to viewers, it wasn't for Kel.