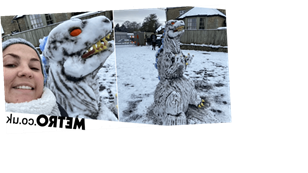 Nick Wolfe was born in America and until he moved to the UK, he had rarely seen snow.

So when the cold snap hit last weekend, partner Jade Laforest, 33, wanted to do something special.

The pair created a huge Godzilla out of the white stuff, adding detail with body paint and a butter knife.

It took them two hours to make the replica of the world’s scariest monster in their front garden in Charlton-on-Ottmoor, Oxfordshire.

Jade, a professional body paint artist, said: ‘Nick was born in America and has rarely seen snow fall so as soon as it started belting it down we went outside to make a snowman.

‘Once we made the base shape, we started getting more into it and started mulling over what theme our snowman should have.

‘Rather than a theme, we wanted a character, and that’s where Snowzilla came from, he’s a combination Nick’s favourite movie monster and his excitement at playing in the snow.’

Their creation attracted lots of glances from passersby.

Jade adds: ‘Everyone really liked the snowman when they saw it, but it does get funny looks from random people walking by.

‘We’re just very happy nobody had knocked it over, although I must say I was mostly just cheering him on with a cuppa rather than in the middle of it.

‘We had great fun making it and hope that everyone else who sees it gets the same kick out of it as we do, I think we all need a little chuckle right now and hopefully Snowzilla has done that for someone.’

Get in touch at metrolifestyleteam@metro.co.uk.