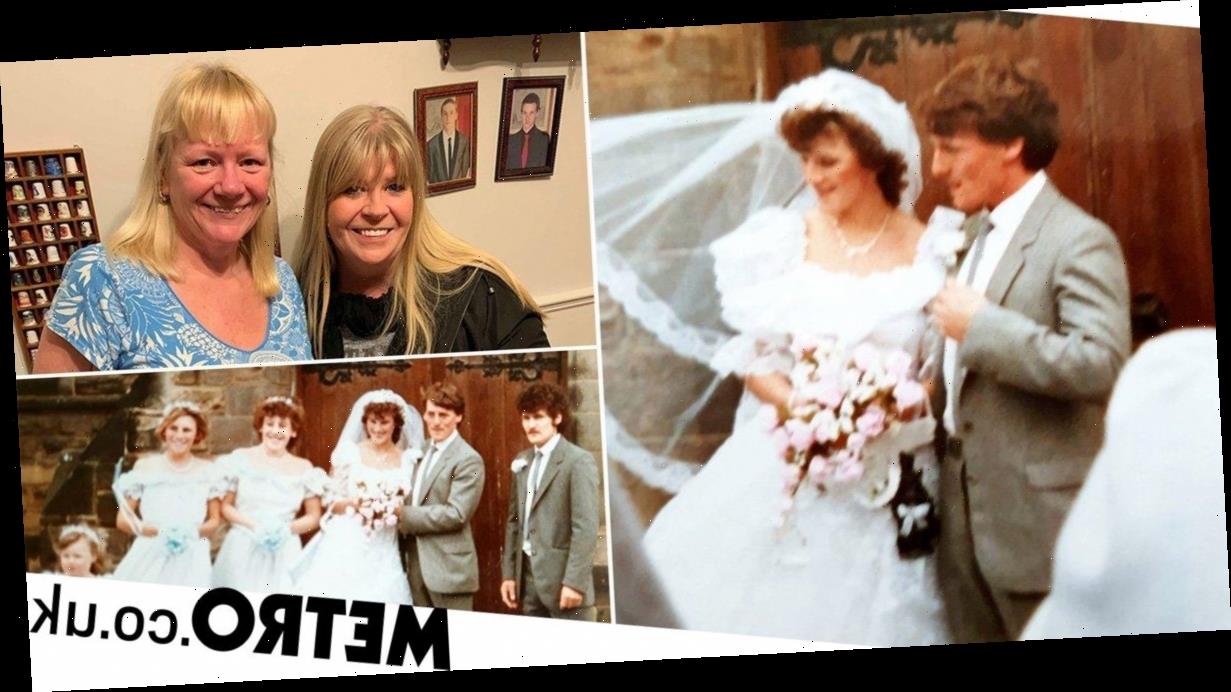 35 years ago, Mick and Tracey Hepworth got married and after an amazing day, they were dancing the night away at the reception.

But as they celebrated together, thieves stole a handbag belonging to Tracey’s cousin Karen Williams.

Family members chased them down, as the bag contained a roll of film with pictures of the day.

But they stabbed Karen’s dad and got away, and the couple thought they’d never see the pictures again.

They had no idea that stranger Angie McHale picked up the bag that night and she’d had the pictures developed in the hope of tracing the owner.

At the time, she hadn’t been able to track down the people in the snaps but over three decades later, she found the pictures again and this time, with the help of social media, she found Mick, 60, and Tracey, 55.

Recalling the night of her cousin’s wedding back in Leeds on July 6, 1985, Karen, now 55, said: ‘We were all just up dancing and when we went to sit back down, my bag was missing.

‘We saw the two men running out and my auntie ran after them shouting “it is them lads”.

‘A huge fight broke out and my dad got stabbed.

‘The lads ran off and must have gone up and around the corner, we just lost sight of them.

‘Some girls told my brother not to chase after them and they ended up getting away.

‘The camera and film were in my handbag.

‘As far as we were concerned, the pictures had gone, never to be seen again.’

Almost 35 years on, Angie was clearing out her home ready for her fourth move when she came across the pictures and made the online appeal.

Angie had found the empty bag on the street, with the roll of film beside it.

She said: ‘I decided to take the film to be developed at the chemist and discover what was on the photographs.

‘The film must have just fallen out of the camera.

‘There was no internet then, I just didn’t know how I would find out who was in the pictures.

‘I came across them again after having a clear out ready to move and thought I could try one last time to find the people involved. I vowed to find them.

‘I would have never thrown the photographs away, I just never thought I would find them. To put faces to the old photographs is incredible.’

Christine, Karen’s sister, said: ‘Somebody I know messaged me and said ‘I think I have spotted you on some old photographs’.

‘Everyone locally had shared it, there were 400 or 500 comments when I saw the post.

‘I couldn’t believe it, the photographs posted on Facebook were the missing ones from 1985. Our family were absolutely amazed.’

Christine and Karen reached out to Angie, who told them to give her the address to reunite them with the photographs.

When Angie turned up at the family’s house in Leeds, Karen and Marjorie Warren, Karen and Christine’s mum, were waiting there with flowers.

Tracey said: ‘It was lovely to see such happy memories of a wonderful day despite the unfortunate incident with my uncle.

‘I remember it was such a happy and exciting day for us all as a family.

‘We will be celebrating our 35th wedding anniversary on 6th July 2020.

‘It was a thoughtful gesture for what was a complete stranger, Angie Mac, to decide to track down the owner of the photos.

‘We have sadly lost some family from these photos but its a lovely reminder of them and I’m sure it’s brought a smile to their faces as it has done for us and all our family.

‘It just shows Facebook can be used for good and I was completely surprised at how many comments there were wanted to know if we were still together.’

Do you have a story to share? Get in touch by emailing MetroLifestyleTeam@Metro.co.uk.