Couple makes DIY kitty chute so their cats can relax outside 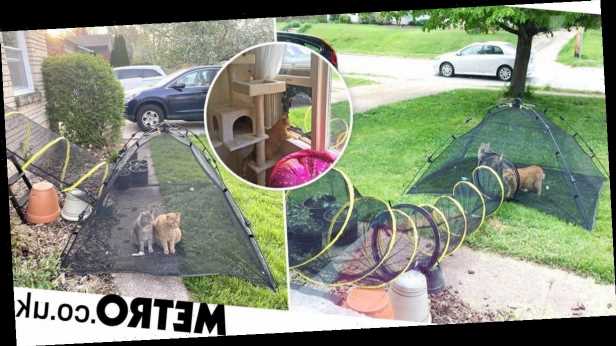 A couple has come up with a way to let their indoor cats get some time outdoors: a DIY kitty chute leading from their house to a tent in the front garden.

The tunnel – fastened with tape – allows the cats to make their way to their own outdoor play pen, letting them get fresh air and feel grass beneath their paws while keeping them safe.

The two cats, Archie and Toonie, love the contraption.

The cats’ owner, Anabel Maler, 30, of Iowa City, said: ‘I was the mastermind behind the cat tent.

‘I came up with the idea but my husband put it all up for me. I’m more of an idea person. He’s the one who built it.

‘They absolutely love it. They chase each other in and out of the tent all day and they lie in there sunbathing.

‘Toonie likes to lie in the tunnel and sunbathe endlessly. We put a catnip plant in there at one point and they went absolutely wild.

‘We’ve had it set up for about a month. We originally had just one tunnel and the tent, then we added another tunnel.’

While the chute may look a little structurally unsound, the Malers say the taped up chute has held up brilliantly.

‘The cats put the tunnel to the test and they run vigorously through it,’ said Anabel. ‘It seems really well made though and the duct tape held up better than I imagined.

‘I would also like to build a little cat-tio in the back, but this is a rental house, so we’re not sure if our landlords will be okay with it.

‘By Cat-tio I mean like a rectangular prism with chicken wire and wood attached to the back of the house that they could go in and out through the window.

‘Basically it would be an extension of the house into the back yard. It would also be cool to have a tunnel from the front to the back of the house with either mesh tunnels or chicken wire.’

As well as bringing the cats a lot of joy, the kitty chute has attracted attention from the couple’s neighbours, who keep stopping to take photos of the cats in their play pen.

‘One time a lady even circled the block in her car to show her kids,’ said Anabel.

‘They’re cats, so the whole house belongs to them, but they love to be on the grass the most.’

Have you created a genius DIY project you fancy sharing? Get in touch to tell us all about it by emailing MetroLifestyleTeam@Metro.co.uk.

Oh, and please do share pics of your cats in the comments section below. We’ll always appreciate those.