Retirees Tom and Anne had moved into a rental property in Cheshire while searching for their dream home in the area to be closer to their family.

Appearing on the programme last night, they said they had seen over 40 properties in their property search, but the hunt was hampered by their extensive checklist – including four bedrooms, a large garden for their grandchildren to run around in and a space they could move into immediately.

Ultimately, the couple decided to pay £15,000 over their initial budget for a refurbished detached home in  Titherington.

However many viewers were left baffled by the fact they couldn’t find a property within their budget, with one writing: ‘Ah the poor souls struggling to find a place for two people for £600k. Up North.’ 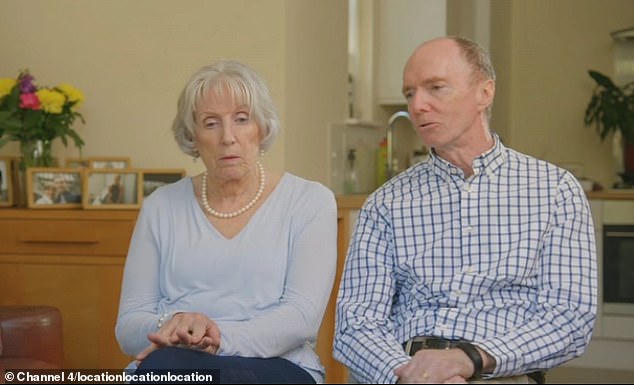 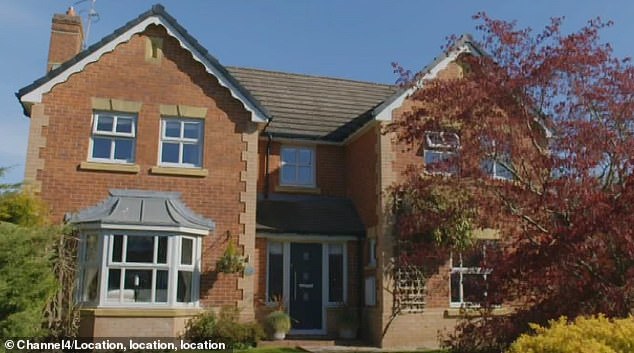 Ultimately, the couple decided to pay £15,000 over their initial budget for a refurbished detached home in Titherington

Another wrote: ‘I’ve literally been watching for thirty seconds and I hate this couple already.’

‘You don’t need Phil and Kirsty. You need a kick up the hoop.’

The couple had notched up 40 years together, and had lived in the South of France, Ireland and Dumblaine.

But Anne felt the need to return to her roots, saying: ‘I think people in our age group do move to be near to grandchildren.’

She said she hoped to move down to south Manchester to be closer to other members of her family. 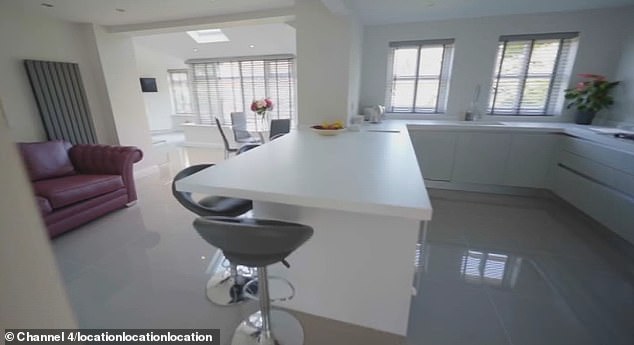 The house, which had been newly refurbished, wowed both Anne and Tom after Kirstie showed them around 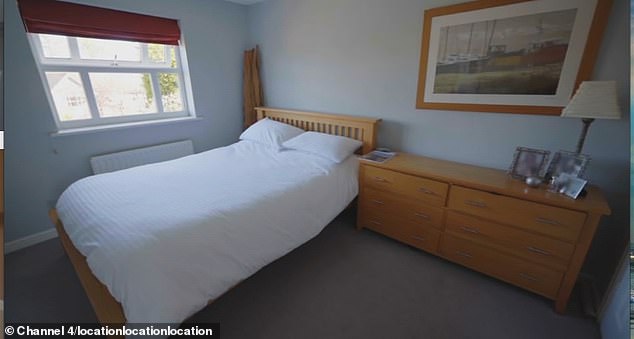 The four-bedroom property ticked multiple boxes for the couple, and they were blown away by the stunning refurbishments 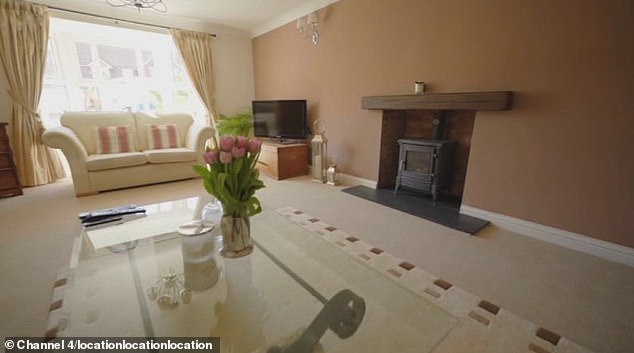 Having moved into a rental property in the area, the couple were keen to find their dream home as soon as possible.

But it wasn’t about downsizing for the couple, who were looking for a spacious home so that their offspring could visit any time.

Anne confessed their search had been a battle, confessing: ‘The area we’ve picked is quite an expensive area. Our budget and what we’re looking for perhaps just don’t match.’

Tom said: ‘What Anne wants is what we should go for, because I could live in a tip.’

Speaking to the couple, presenter Kirstie said it sounded as though they were looking for a property with ‘real flex’, saying: ‘It can be warm and cosy when it’s just the two of you but it’s also got that [space].’

Anne and Tom said they had seen 40 houses so far in their property search, hoping to find the dream home with four bedrooms, a big kitchen, a decent sized kitchen and a big garden.

They also confessed they were not keen to do any renovations so hoped the property would be in move in condition, and have an active community close by.

The first property was in the village of Titherington, about 40 minutes from family in Manchester.

Kirstie said: ‘This whole estate does work for me, but how do you feel?’ 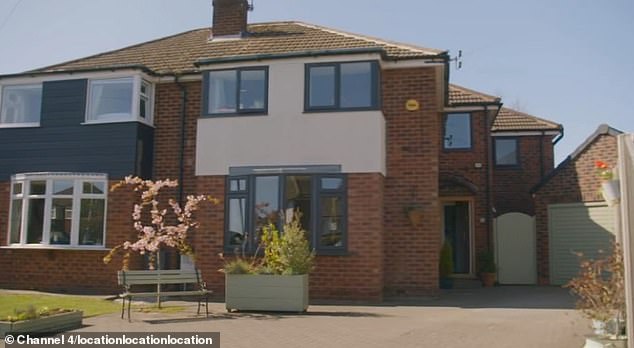 Anne and Tom agreed, saying the home had ‘curb appeal.’

Downstairs was a huge open plan kitchen and living space with a separate utility room as well as a big lounge with a wood burning fire.

However the house, which was on the market for £580,000. had already wracked up multiple offers from other potential buyers. 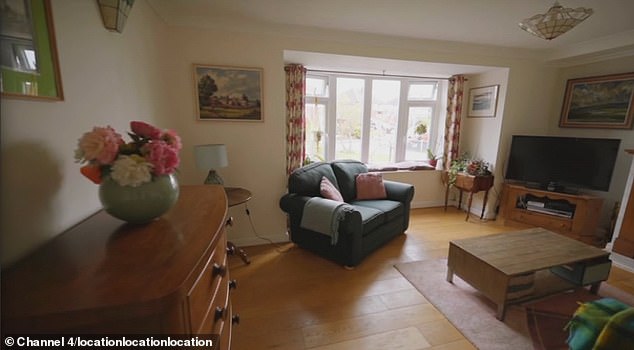 While Anne admitted the area was convenient, Tom said he couldn’t stop thinking about the first home they had already seen (pictured, the living space)

Kirstie explained: ‘They have had four asking price offers, and it’s going to best and final tomorrow afternoon.’

Looking around the house upstairs, Anne and Tom were blown away, with Anne adding: ‘It’s really immaculate.’

The second property the couple visited was in Wimslow, which Anne said was ‘a very convenient area’.

However Tom was immediately unsure, saying it ‘couldn’t compare to the first property’ which was ‘in a different league’. 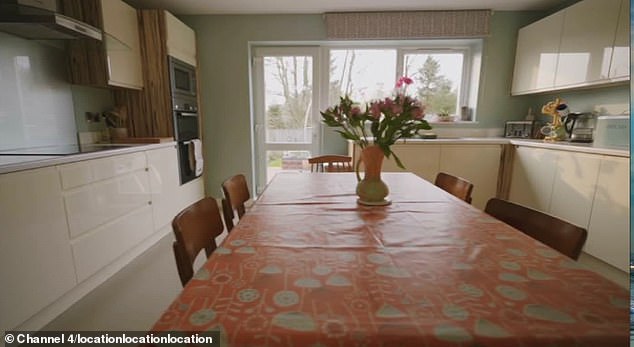 Meanwhile Tom was immediately unsure of the house, saying it ‘couldn’t compare to the first property’ which was ‘in a different league’ and refusing to even look upstairs

The house had a modern living space and bigger kitchen, which opened out onto the enormous garden.

And upstairs there was a good sized main with an ensuite and a dressing room, two further doubles and a single bedroom.

The property wasn’t officially on the market yet, with  a guide price of £575,000, thanks in part due to its postcode.

But Tom refused to even look upstairs in the property, saying: ‘I think there’s no competition with the first one. Just the style of the place, we could move in – hands down, perfect.

‘If we moved in here, Anne would have me gut the place.’ 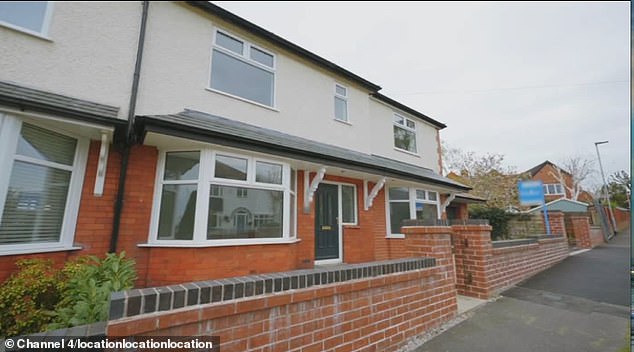 The third, and final property, was in Stockton Heath and featured four bedrooms and an enormous kitchen/diner room (pictured)

Before moving on any further with their search, Tom and Anne said the house was a ‘definite no.’

The third, and final property, was in Stockton Heath and featured four bedrooms and an enormous kitchen/diner room.

The property was being marketed at £569,000, and was in move-in condition for the couple.

Anne said: ‘It’s gorgeous. It’s really nice. The garden is small but the patio is big.’

However Tom was unimpressed, adding: ‘The garden is too small for the grandkids to run around in.’ 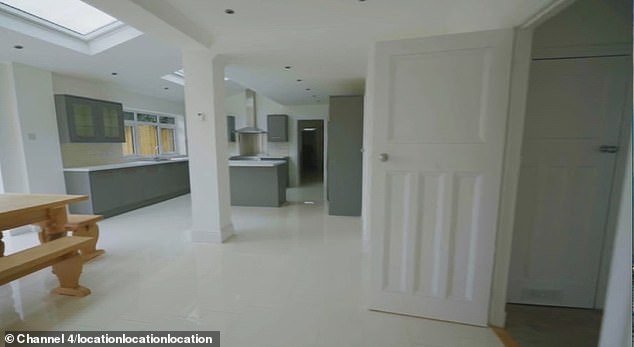 The property was being marketed at £569,000, and was in move-in condition for the couple (pictured) 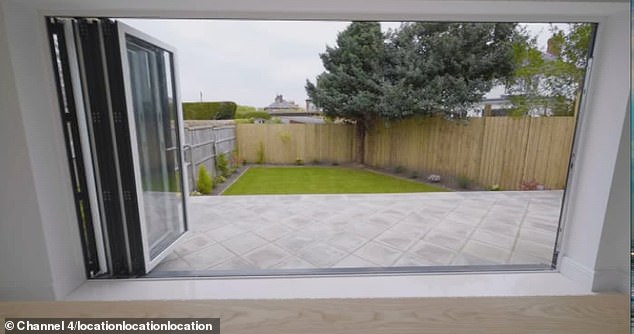 Despite the pristine interiors, the couple complained that the garden wasn’t large enough for their grandchildren to run around in

And it wasn’t long before they confirmed they were still thinking about the first property, with Anne saying: ‘The first house is streets ahead.’

Things were tense with the couple, who had fallen in love with the first house.

However Kirstie told the couple there were already six offers on the property.

They decided to put in the offer at £615,000, with Tom and Anne dipping further into their savings to top up their budget.

After an overnight wait, the couple’s offer was accepted and they were left feeling overjoyed.