Debbie Harry rocked the Met Gala red carpet in a patriotic dress that was perfectly on-point for the 2021 show’s “American Independence” theme.

In addition to being the fashion world’s biggest night, often compared to the Oscars, the New York City event is a fundraiser for the Metropolitan Museum of Art’s Costume Institute and coincides with the opening of a new exhibit every year, in this case, the debut of “In America: A Lexicon of Fashion.”

Proving that she understood the assignment, the Blondie co-founder, 76, arrived at the event donning a red, white and blue ensemble that mirrored a tattered American flag in what was surely one of the more literal interpretations of the theme at the event. The dress was framed with what appears to be a wire skirt going from her waist to the ground that was lined with tattered red and white striped fabric that gave the illusion that the battle-worn flag was waving in the wind. 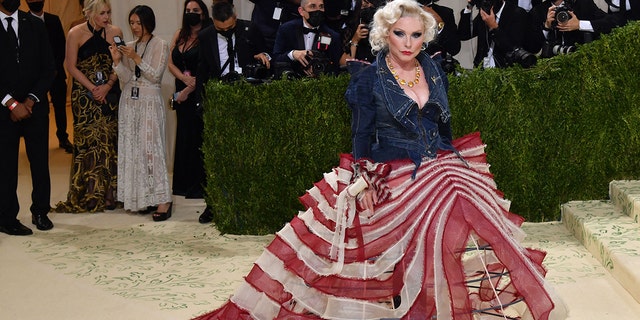 US singer Debbie Harry arrives for the 2021 Met Gala at the Metropolitan Museum of Art on September 13, 2021 in New York.
(ANGELA WEISS/AFP via Getty Images)

On top, she wore a deep blue denim jacket. The only thing missing was the stars, but there was at least one in the ensemble, Harry herself, who sported a blonde shoulder-length cut and deep red lipstick. 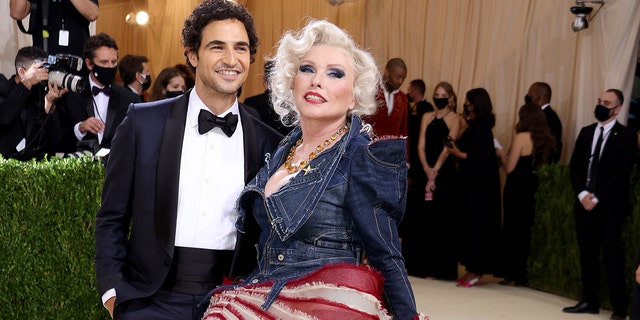 Zac Posen and Debbie Harry attend The 2021 Met Gala Celebrating In America: A Lexicon Of Fashion at Metropolitan Museum of Art on September 13, 2021 in New York City.
(John Shearer/WireImage)

The dress was an original, custom outfit made by designer Zac Posen. Page Six previously revealed that Posen would be designing her outfit after they were spotted together in New York City over the weekend at an exhibit of the work of late New York Times photographer Bill Cunningham.

The outlet notes that Posen is no stranger to turning heads on the Met Gala red carpet with his high-fashion looks. He previously dressed Claire Danes in a gown that had fiberoptics at the 2016 show. Fast forward to 2019 and he had a field day with the show’s “Camp” theme by dressing stars Jourdan Dunn, Nina Dobrev, Katie Holmes, Julia Garner and Deepika Padukone in gowns that included 3D-printed elements.