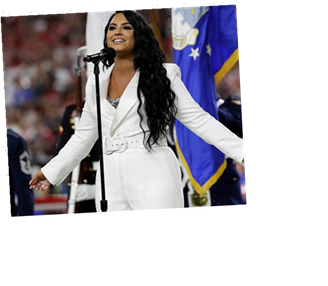 From a near-death experience to the country’s most prominent stage.

About a year and a half after the singer almost died from a drug overdose, Lovato took to the center of the football field in Miami and belted out a version of the national anthem.

The artist, decked out in all-white, needed just over two minutes to get through the Star-Spangled Banner, belting out a rendition that, so far, has received mostly positive reviews on the Internet.

The following may be a little grainy, but it’s a glimpse at Demi doing her thing…

…  in front of, literally, hundreds of millions of viewers.

On the Sunday morning before her performance, the 27-year-old pop star re-shared a tweet of hers from 10 years ago.

And you may be stunned to see what it said.

How about that, huh?!? Demi seemed to have spoken this dream into existence.

How did Demi fare? How did she compare?

Demi Lovato sang the national anthem at the Super Bowl LIV. How did she do? Hand out a grade now! View Poll »

Lovato’s appearance at the Super Bowl is part of her slow and gradual return to the public eye; the superstar has kept a low profile since her near-fatal overdose in July 2018.

“It’s taken me a long time to even get this far, which is performing a song that’s so vulnerable to me on a stage in front of all of my peers and co-workers and people I look up to.

“It’s nerve-wracking to think about, but at the same time, I’m grateful I have this opportunity.”