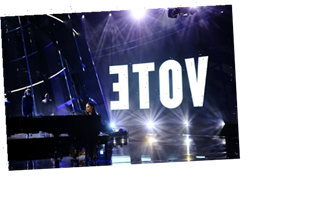 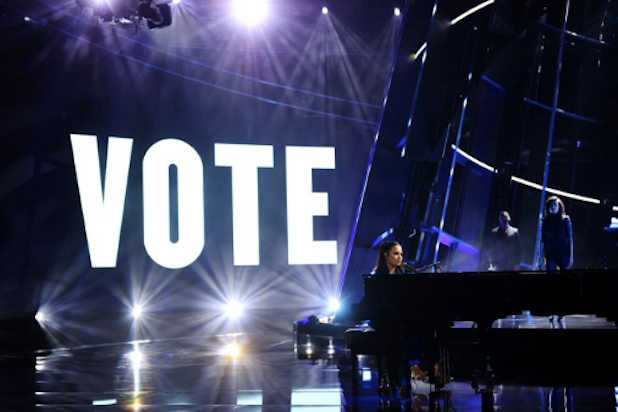 Demi Lovato performed her new anti-Trump track “Commander in Chief” during Wednesday’s telecast of the 2020 Billboard Music Awards on NBC, though what viewers saw on TV was an altered version of what the singer had prepared, TheWrap has learned.

According to footage obtained by TMZ, Lovato’s performance, which was among several that were prerecorded for the awards show, originally included a “Vote” graphic displayed behind her when the song concluded. When the singer’s “Commander in Chief” rendition aired on NBC as part of the Billboard Music Awards last night, the “Vote” message did not appear on screen and the number instead ended with a closeup of Lovato looking down at her piano.

Sources told TMZ that NBC edited out the visual because Lovato’s song was already critical of Trump and the addition of the “Vote” message was seen as encouragement to vote against POTUS.

People on social media began to criticize NBC, which is airing a town hall with President Trump Thursday night opposite ABC’s event with Joe Biden, based on both TMZ’s reporting about the editing done to Lovato’s performance and a tweet sent out by the network itself Wednesday night, which showed the “Vote” message behind Lovato that did not air during the BBMAs.

“pack it up trumpies we know you digitally removed her VOTE background during the performance,” one user commented on NBC’s tweet.

“Funny how you show it here, just not on T.V.,” another viewer wrote.

“Waiting for an explanation of WHY would you cut her performance and not show the screens behind her,” a different user commented.

Representatives for NBC, Dick Clark Productions and Lovato did not immediately respond to TheWrap’s request for comment.

Lovato released “Commander in Chief” ahead of her performance Wednesday night. Among the many criticisms of Trump packed into the lyrics are these references to his response to the pandemic and Black Lives Matter movement: “Commander in Chief, honestly/If I did the things you do, I couldn’t sleep/Seriously, do you even know the truth?/We’re in a state of crisis, people are dying/While you line your pockets deep/Commander in Chief/How does it feel to still be able to breathe?”