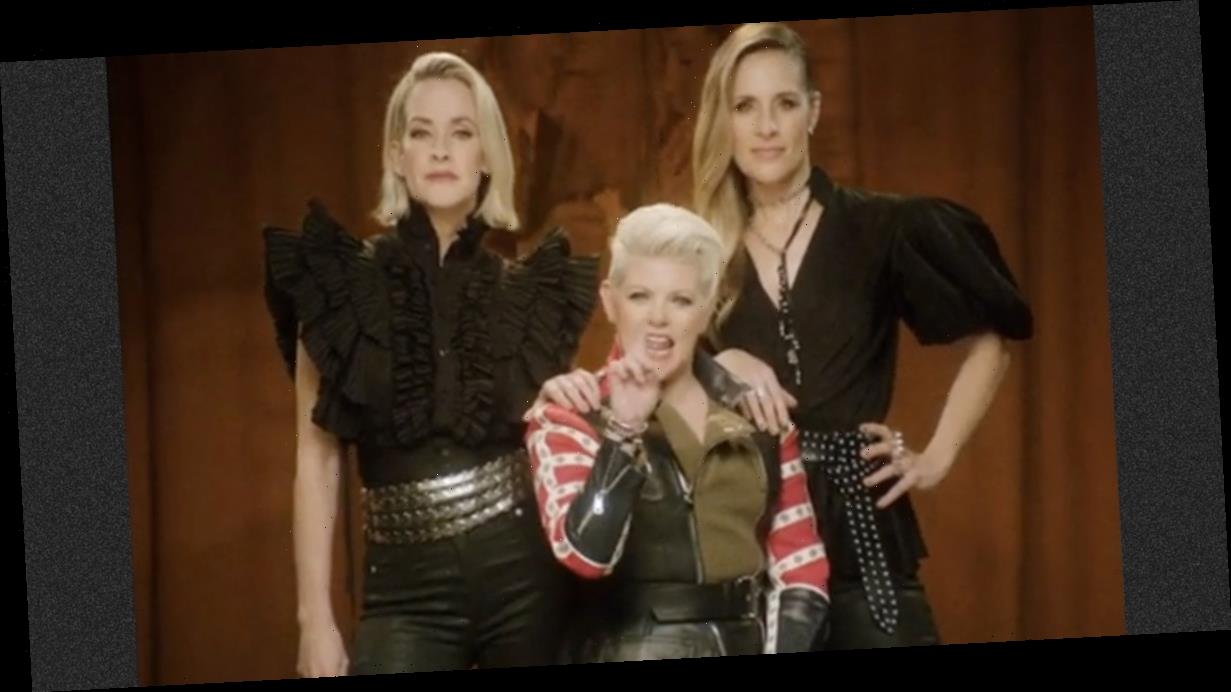 Natalie Maines said their group’s new music was inspired, in part, by her divorce from Adrian Pasdar.

After far too long a hiatus, the Dixie Chicks are back.

On Wednesday morning the trio — consisting of Natalie Maines, Emily Robison and Martie Maguire — dropped their first official single since the 2006 release of "Taking the Long Way." The song, "Gaslighter," takes aim at a man whose repeated lies take a damaging toll on his wife.

The group also dropped a video with the song:

"Gaslighter, denier, doing anything to get your ass farther," the women sing in the chorus. "Gaslighter, big timer, repeating all of the mistakes of your father."

The lyrics follow a woman who moves to California with her husband to pursue his dreams in Hollywood. Saying the industry welcomed him "with open doors," they add, "no matter what they gave you, you still wanted more."

"Gaslighter, you broke me, you’re sorry but where’s my apology?" they ask, before the lyrics then tell the tale of a contentious divorce. "You thought I wouldn’t see it if you put it in my face, give you all my money, you’ll gladly walk away," the song continues, "You think it’s justifiable, I think it’s pretty cruel. You know you lie best when you lie to you."

Calling out the man for not taking the high road and trying to make the woman look like the crazy one, they roar, "Save your tired stories for your new someone else, because they’re lies."

Maines previously said the group’s new music was inspired, at least in part, by her divorce from "Heroes" star Adrian Pasdar.

"When I started getting a divorce, I had a lot to say. That sparked me being ready [for new music]" she said in an interview with the Spiritualgasm podcast last year. "Songwriting is really hard for me, and I think for many years, I didn’t want to analyze my life or my relationship. I was just in it and dedicated and devoted, and if I had started writing songs about it, that might not have been good. I don’t want to say I was in a ‘survival mode,’ it wasn’t like that, but I was just not ready to open up like that."

"And then when my relationship fell apart, so I had a lot to say," she added. "Our last album was the most personal and autobiographical we’d ever been. And then this one is 10 times that."

Maines split from Pasdar in 2017 and a messy legal battle followed, in which he asked for spousal and child support. They settled the matter in December 2019. Since the release of their Grammy-winning "Taking the Long Way" — which included "Not Ready to Make Nice" — all three of the women have gotten divorced.

Kendall Jenner Composes 'A Love Story' in This Barely-There Bikini

All the Stars Doing Their Civic Duty This Super Tuesday

Judge Judy Reveals The Fate of Her Show to Ellen

The Hadids Remind Us That Fashion Week Is Not Over Yet

All the Must-See Celebrity Sightings from Paris Fashion Week

Inside The Celebration of Life for Kobe & Gianna Bryant

Kate Beckinsale Gives a Peek at Her Perfect Bikini Body