Despite the fact that ex-President Donald Trump’s more-or-less official website was shut down for good in early June, it seems that the one-time real estate tycoon is still set on making his feelings and opinions known. Considering his highly-publicized bans from major mainstream social media platforms like Facebook and Twitter have somewhat hindered his ability to magnify his messages as in days of yore, Trump seemingly has his mind set on circumventing these impositions.

The most recent example of this became evidently clear on June 20, in which Trump managed to get a particular message out in time for this year’s Father’s Day. But unlike the Hallmark card parents might expect on the third Sunday in June every year, Trump’s statement purportedly tended towards a more backhanded, swiping route. And much like the many, many tweets and posts he used to send to the world on a daily basis, this one took aim at a number of his old targets.

So what did Donald Trump’s Father’s Day message contain? And what kind of response did it receive? Keep on reading after the jump to find out all about it. 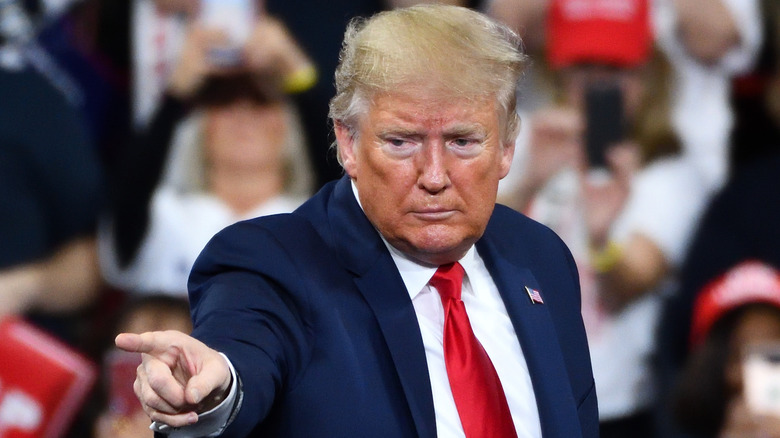 As the New York Post reported shortly following Father’s Day, Donald Trump’s latest statement, ostensibly made specifically in light of the holiday, appeared to focus more on bashing the twice-impeached president’s supposed adversaries. The message, which was published by a pro-Trump political action committee, made its way to social media through social media users who count themselves as members of his conservative voter base, per the Post. “Happy Father’s Day to all, including the Radical Left, RINOs, and other Losers of the world,” read Trump’s memo, which included his “Republicans in Name Only” acronym meant to target Republican party members who have gone on the record against Trump’s policies and platforms. “Hopefully, eventually, everyone will come together!”

As Raw Story noted in their coverage of the statement, a number of Twitter users took to the platform to express criticism and even disgust over the content it contained, calling it “malevolent” in nature. One person asked in disbelief if the statement was a “joke,” with another categorizing it as “classless.” Suffice it to say, if Trump’s intention was to turn heads and raise eyebrows, it seems he ultimately succeeded.