‘Dune’ vs. ‘Dune’: Why David Lynch’s Version Is a Lot More Fun Than Denis Villeneuve’s

Hear me out on this: David Lynch’s “Dune” is a lot of fun — and, compared to the self-serious posturing of Denis Villeneuve’s new version, it’s a ridiculous blast.

For years, the popular assumption has been that Lynch’s 1984 version got “Dune” wrong, while the hype surrounding Denis Villeneuve’s own adaptation is that he got it right. In a recent interview with The New York Times, Villeneuve said that he approached the seemingly cursed endeavor of bringing Frank Herbert’s 1965 space epic to the big screen, it was “about the book, the book, the book.” (Emphasis his, apparently.) He added that Lynch’s attempt, much like Alejandro Jodoworsky’s unrealized production years earlier, suffered from a fatal flaw. “I don’t know if he was really interested by ‘Dune,’” Villeneuve said, so much as his own predilections as a filmmaker.

Yet that’s exactly what makes the earlier “Dune” so fascinating: It fuses Herbert’s geopolitical sci-fi world-building with Lynch’s own macabre dreamscapes, resulting in an absorbing blend of B-movie storytelling, oddball Freudian signifiers, and an adventurous visual palette. With its whispery voiceover and flamboyant costumes alongside erratic editing strategies no less disorienting than your average scene in “Eraserhead,” Lynch’s “Dune” presents a hazy fusion of pop culture and experimental artistry like little else produced on the mass market stage, creating the impression of a soap opera piped in from another dimension. No wonder he was excoriated for it.

Sure, the movie has oodles of corniness and baffling miscalculations that make it an easy target for derision: Kyle MacLachlan gives a lethargic performance as Paul Atreides, while Alicia Witt’s creepy kid Alia Atreides acts like she was lifted from “The Omen,” and countless supporting characters speak in monotonous pronouncements that require every word to be followed by a period. A lot of the zany asides fall flat (though the cat milk machine is an inspired proto-meme). But the movie retains much of the inventive universe that Herbert created (inspiring “Star Wars” in the process) and it’s fascinating to look at it in light of Villeneuve’s version, which has been far more widely embraced as a love letter to the novel. 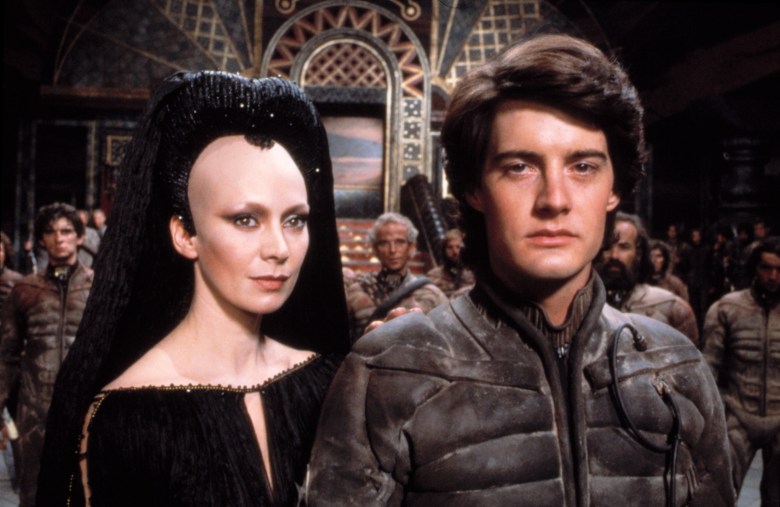 That perception doesn’t seem to take into account that both adaptations maintain the gist of Herbert’s plot while funneling it through each directors’ distinctive vision. Watching them side by side is akin to seeing two cover bands from different genres chasing the same melody: Lynch takes the punk rock approach, attacking the material through eccentric throwaways and otherworldly kinkiness; Villeneuve treats it like heavy metal, cranking up the volume with moody precision. It’s a dealer’s choice situation — at the core, they’re both essentially “Dune.”

The comparisons come down to many individual scenes, from Paul’s initial trial with the “pain box” (Lynch gives us more fiery cutaways to accentuate what the character experiences here) to his training sequence with a protective energy field that looks a bit silly with the hand-drawn effects that 1984 afforded and significantly cooler almost 40 years later. (Also, Josh Brolin is a much more convincing trainer than Patrick Stewart with a mullet.)

When Paul and his mother Lady Jessica escape the Imperial Sardaukar, they use their telekinetic voice powers to trick their captors into releasing them: In Villeneuve’s version, the scene unfolds as a rapid-fire exchange as one troop is ordered toss himself out of a plane, while in Lynch’s scene the coercing takes place at a low murmur that enhances the suspense. Lynch’s version certainly wins out with the better villain: Stellan Skarsgaard does his serpentine best for Villeneuve as the slippery Baron Vladimir Harkonnen, but he’s got nothing on Kenneth McMillan’s outré version, a grotesque, cackling being covered in boils and dripping in sweat who oozes with wickedness in his every frame (with no less than a steampunk Sting as his minion!). 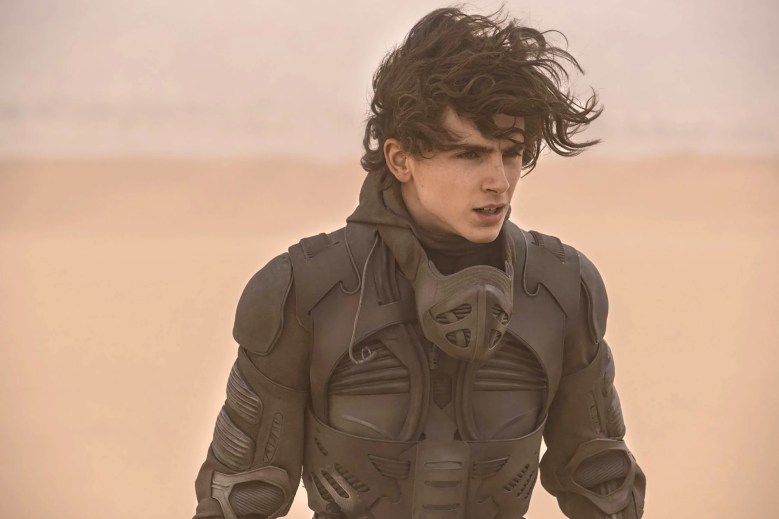 Overall, Villeneuve relies on polished surfaces and measured performances that try to sell the idea of a vast futuristic dystopia by grounding it in some semblance of naturalism. It’s a fascinating undertaking that certainly utilizes the blockbuster toolbox in complex, atmospheric ways. As Paul, Timothée Chalamet delivers an involving, mysterious performance, blending the coming-of-age pathos he does best with spindly physicality that pits him against the standard warrior archetype.

At the same time, Villeneuve’s style trades much of the expressionistic energy found in his remarkable “Blade Runner 2049” for a subdued literal-mindedness that calls to mind Zack Snyder’s similarly faithful interpretation of “Watchmen”: All of the pieces that make the original work appealing remain intact, but their form is less towering monument than uncanny valley.

Meanwhile, Lynch’s “Dune” actually finishes the story it sets out to tell. While Villeneuve’s “Part 1” gets just far enough into the drama to tease the epic battle to come, Lynch finds his way there in 90 minutes, with the arrival of a worm-surfing tribe that gives Paul all he needs to weaponize the desert threat and use it to take on the devious Harkonnens once and for all. In Villeneuve’s version, Paul doesn’t literally encounter Chani (Zendaya) among the desert people of the Fremen until the closing chapter, where she arrives as an obvious placeholder for the movie to come. While Lynch’s “Dune” reduces her character to little more than a hackneyed romantic interest, it does give us plenty of payoff, with a sprawling climactic showdown that careens dusty large-scale worm battles to a knife fight.

The movie just keeps moving ahead, stumbling through the ludicrous plot specifics with one zany idea after another. It’s a total messy delight, a Lynchian pizza pie that begs to be devoured whole.

Still, the ambition and elegance of Villeneuve’s “Dune” makes the most out of the potential for big-screen storytelling in pure visceral terms. See it in IMAX, experience the rumbling Dolby sound and vast desert landscapes in the “Lawrence of Arabia” scale it aims to convey, or don’t see it all. But let the record show that this “Dune” doesn’t get the material “right” any more than Lynch got it “wrong.” And only one of them is still pretty good on HBO Max.