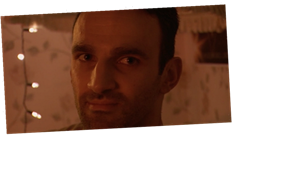 The friends decided to spend the evening together with some nice food, a few drinks and a film.

However, things didn't go quite to plan and they experienced a power cut just as they decided on what movie to watch.

Whitney rushed to get some candles and the romance ambience left the randy pair feeling hot under the collar.

They shared a passionate smooch on the sofa but viewers were left worried for Kush's safety.

Taking to Twitter, one fan penned: "Kush and Whitney are cute but he is definitely getting killed by Gray at some point."

Another added: "Just wait until Gray finds out."

A third person guessed: "Wouldn’t surprise me if Gray was the one ruining Kush and Whitney’s 'non date'."

"I swear if they have Gray kill Kush, I’ll definitely complain about it online for several days," a fourth viewer posted.

A fifth said: ""I’m not against Kush and Whitney but it’s making me think that Gray will probably end up killing Kush and I don’t like the thought of that at all #EastEnders @DavoodGhadami."

"I don't watch EastEnders and I only see teaser articles tangentially when looking for Emmerdale stuff but come on, even *I* know Gray is going to kill Kush," a sixth fan predicted.

Gray has become controlling towards Whitney after she decided to help him with his kids following the tragic death of his wife Chantelle Atkins (Jessica Plummer).

He brutally murdered Chantelle after years of abusing and controlling her.

Gray recently killed Tina Carter (Louisa Bradshaw-White) after she discovered what he did to Chantelle.

Will Kush be his third victim when he finds out about his night of passion with Whitney?

An EastEnders spokesperson said at the time: "We can confirm Davood will be leaving EastEnders when his contract comes to an end next year.

"Davood has been a wonderful addition to EastEnders and we wish him all the best for the future.”

The actor joined the long running soap six years ago. His character Kush was introduced as Martin Fowler’s old friend and a new trader on the Bridge Street market.

EastEnders continues on BBC one on Monday at 8.05pm