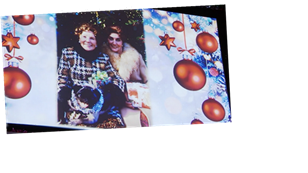 Walford residents remembered the good old days during a festive tribute which paid homage to characters from the past – including some much missed dead characters.

In the emotional scene, a slideshow of photographs were shown to the crowd at the Christmas community event.

Other faces from the past included Pauline and Arthur Fowler and Lou Beale and residents enjoyed the look down memory lane.

It wasn’t just those who we miss who featured as Sharon Beale (Letitia Dean) featured in a family photograph from the 1980s and a cute snap of Honey (Emma Barton) and Billy Mitchell (Perry Fenwick) also showed up, awkwardly on the same day that Billy was spotted his ex sharing a kiss with Jay (Jamie Borthwick).

Discussing the nostalgic presentation of photos, one fan tweeted: "It really did the heartstrings, .made me glad we had a on-screen exit for Peggy when it was possible."

Another added: "All the icons. Peggy, Angie, Pat, Frank."

The montage brought a sense of warmth to the Sqaure until Ian Beale’s (Adam Woodyatt) photo came up with an sinister RIP death date of December 25 2020.

As Ian was left terrified by this very dark threat, many of the suspects in his recent attack watched him for a reaction.

EastEnders spoilers have revealed that it is going to be far from a happy Christmas for Ian Beale.

He's been targeted by a mystery culprit for weeks and the identity for the mastermind is set to exposed over the festive period.

Just moments earlier, Kim Fox (Tameka Epson) had told her young daughter Pearl how Walford can be a "dangerous" place.

As the little girl asked about the people in the photos on the screen, Kim told her none of them were around anymore.

Is Ian going to be the next resident to be carried out of Albert Squarein a body bag?

EastEnders continues on BBC One on Christmas Day at 9pm