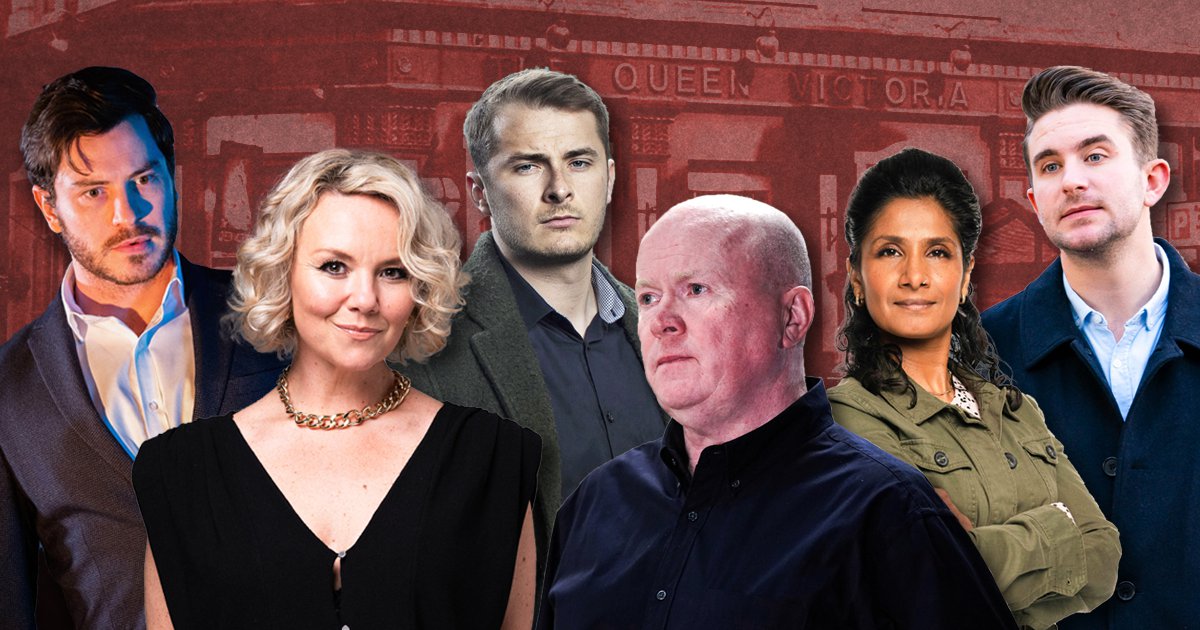 The season of goodwill and festive cheer might be over, but EastEnders is only just warming up, with a number of huge stories set to commence in the New Year, while others reach their thunderous conclusion.

It was certainly a Christmas to remember for the residents of Walford, although maybe not for all the right the reasons!

Heartbreak reigned supreme for Sonia Fowler and Kathy Beale, as they discovered Rocky wasn’t who he says he is, while Chelsea Fox wed Gray Atkins, before ultimately finding out that he’s a killer!

With a fresh start on the horizon, many of Walford’s finest are hopeful for what’s to come, but the non-stop drama of the Square is never far away, so expect shock twists, secret discoveries and heartache aplenty.

Teasing what viewers have to look forward to in 2022, an EastEnders spokesperson said: ‘With 2021 firmly behind them, the residents of Albert Square are hoping that fresh starts will be a plenty, but the new year can’t erase the secrets and scheming of the past and it’s not long before things begin to unravel across E20.

‘This year is set to shake up many families in Walford with even more drama to come as almost all the episodes will return to their full length from January.

‘Chelsea’s tumultuous Christmas is far from over, with baby Jordan in hospital and her new husband’s watchful eye more present than ever.

‘Gray ups the ante with his manipulation, using Chelsea’s fragile state to his advantage but Whitney and Kheerat remain steadfast in their plan to catch Gray out and get justice for Chantelle once and for all, it’s only a matter of time before Gray gets his comeuppance….

‘Phil’s snap decision sees unlikely duo Kat and Sharon forced to team up to try and make things right but will they get to him before the police do? Little does Phil know that he’s soon to face his biggest challenge and will be forced make the ultimate decision that will put everything he believes as a Mitchell to the test.

‘Elsewhere, Zack is set on righting his wrongs with Sharon whilst Stacey has a new business venture and her eye on another prize. She’s hoping she might hit the jackpot with her love life too but Jean demands her attention elsewhere. Stacey realises her Mum might need help and struggles to get Kat on side.

‘Over at The Vic, Mick has some adjusting to do as he adapts to the new set up, but things are never that easy when Janine is close by. With Janine falling for Mick, she’s fully prepared to play the long game. Meanwhile, it’s not just Linda the Carters are missing, as Shirley and Mick still long to find out where Tina is.

‘Elsewhere, it’s make or break for the Monroe family, with huge decisions to be made that are set to have lasting impacts on Walford’s newest family. Callum and Ben will also face new trials as Ben finds out that the trauma of his past is never far away. Callum enlists extra help when he sees Ben is struggling, but he’s got a lot on his plate with Stuart too – will he be able to do enough?

‘Stuart’s struggle to accept his diagnosis continues, with him refusing to admit the truth to anyone. He’s determined to bury his head in the sand, even when it comes to treatment. The Highways have lots to figure out as Bernie’s due date looms, Rainie and Stuart are desperate to make their dreams of a family come true – will everything go to plan as Bernie returns?

‘Dotty has been outcast and is battling with the revelations over Christmas– she doesn’t want to become like either of her parents but can you ever really escape your family? When she has no one else to turn to, she leans on Vinny for support and finds an unlikely alliance.

‘Things aren’t smooth sailing at the Panesar’s either, Kheerat is thoroughly caught up in helping Chelsea, so much so he might be missing a chance for romance elsewhere and Suki has to face her fears when she’s confronted by Honey. With her guard firmly up, she takes things with Ash a step too far.’

Sounds like an explosive way to kick off 2022, right?

EastEnders airs Mondays, Tuesdays, Thursdays and Fridays on BBC One.