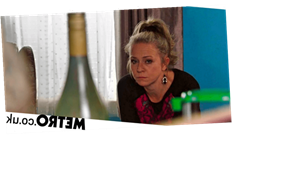 Linda Carter (Kellie Bright) has resorted to alcohol in EastEnders as a method of coping with all of the stress that she’s been under — much to the dismay of husband Mick (Danny Dyer) — but her reliance on the substance has rapidly spiralled out of control, and — as a result — has endangered son Ollie a number of occasions.

The seeds of Linda’s alcoholism were sewn several months back, when the pressures began piling on The Queen Vic landlady, and she found herself struggling to cope. However, hitting the bottle simply didn’t come out of the blue, but rather it was a result of all of the hardship, she’s been through over the years — both since her arrival in Walford and prior to it — something which actress Kellie was aware of prior to filming.

Speaking on This Morning, she said: ‘For me, I had to, when they floated the idea it was about 6 months before we started the story, I started to work back on her history in the show and before the show.’

‘For me, I’ve gone right back to the moment her father died and made her father an alcoholic, so she grew up in a pub and he died very young, but she was probably unaware there was a problem there. She can probably count on one hand the days that she hasn’t had a drink.’

Since Linda’s alcoholism commenced, the narrative has largely been met with acclaim, with much of the praise centring around Kellie’s incredible performance. Being a master of her craft— not to mention knowing how important this storyline is — Kellie revealed that she went to extreme lengths in order to make her portrayal as accurate as possible.

She said: ‘Well, I was terrified but excited by the storyline, it’s so hard to play drunk, it’s a bit like running around with no clothes on. I knew I had to do a lot of work beforehand.’

‘I went to my caravan, drank quite a lot and filmed myself. I went with my dog and filmed myself, what was amazing was that you could see the alcohol hit me in waves. I’d repeat myself all the time then I’d forget. I was waiting for Strictly but missed the whole thing.’

Linda’s addiction swell and truly spiralled out of control over the festive season when she found herself caught up in Keanu’s (Danny Walters) disappearance, but matters became worse on New Year’s Eve during a special instalment which was told entirely from the Carter matriarch’s perspective.

Speaking about the special episode — and the lengths she went to ahead of filming it — Kellie said: ‘We film out of order, it all blew up on NYE and we filmed out of order so I knew I had to work out how drunk I would have to be. I gave it a colour coded chart.’

During Monday night’s episode, Linda’s reliance on booze endangered Ollie, as he went up to the roof — something which resulted in Shirley (Linda Henry) taking charge of the situation.

Speaking about her character’s actions, Kellie said: ‘I find all the stuff with Ollie really hard to do and watch. I feel like she has crossed a line, she’s got herself into a place where she’s on a treadmill of drinking to block out all the things she doesn’t want to deal with, then she can’t remember what she’s saying or doing and coming back into sobriety with guilt.’

EastEnders continues Thursday 6 February at 7:30pm on BBC One.