Australia’s election watchdog is investigating whether Facebook pages allegedly run by besieged Queensland MP Andrew Laming breached the Electoral Act, as they did not include political authorisation disclosures.

Mr Laming is on leave while he undertakes counselling and empathy training after being accused of harassing two women online and taking a photo of a woman with her underwear visible while she bent over. 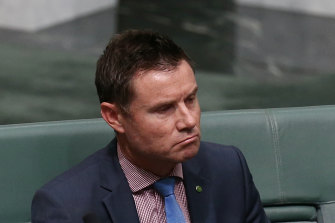 Queensland MP Andrew Laming will not recontest the next election. Credit:Alex Ellinghausen

The Australian Electoral Commission has confirmed it is investigating whether Mr Laming breached the Electoral Act.

The Guardian reported Mr Laming ran more than 30 pages and profiles on the social media platform masquerading as community pages, news sites and an educational institute.

An AEC spokesperson confirmed the watchdog was now investigating whether the pages required electoral authorisation.

“The AEC looks at information either referred to us or available in the public domain — including through media coverage,” he said.

“With regard to the Facebook activity mentioned in the Guardian article published yesterday, I can confirm that we will be investigating the requirement for electoral authorisation.

“A key purpose of the authorisation laws is to allow voters to know who is communicating,” the spokesman said.

“To require an authorisation statement the communication needs to be deemed ‘electoral matter’.”

Preselection has reopened in Mr Laming’s Queensland seat of Bowman, after he confirmed he would not recontest the next election.

Gold Coast woman Fran Ward, 50, is chair of the LNP’s small business policy committee and was the only person to put their name down to challenge Dr Laming’s preselection before he resigned on the weekend.

The LNP leadership voted 11 to 10 on last week to reopen the preselection race in the safe seat, east of Brisbane.

Henry Pike, who ran as the candidate for the state seat of Redlands at the October election, and the party’s honorary legal adviser Maggie Forrest are also contenders.