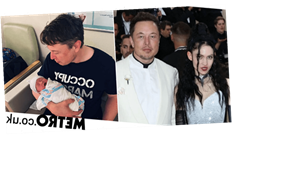 Elon Musk has put us all out of our misery by showing us just how to pronounce his son’s highly unusual name.

The Tesla boss welcomed his first child with girlfriend Grimes earlier this week and the couple chose to bestow upon their baby boy an unusual moniker which is seemingly impossible to pronounce.

In his first interview since his son’s arrival, Elon is pressed by Joe Rogan on how to say the tot’s name and it’s truly a revelation.

‘First of all, my partner is the one who actually mostly came up with the name. She’s great at names,’ Elon revealed giving most of the credit to Grimes.

The billionaire then explained: ‘It’s just the letter X and then the Æ is pronounced “Ash”. A-12 is my contribution…. Coolest plane ever. It’s pretty great.’

Ah right… is anyone else still confused? Just us? Ok, then.

Elon, 48, went on to reveal how he’s loving becoming a father again at his age – the businessman is already a father to five children whom he shares with his ex-wife Justine Wilson. However, their first child died of sudden infant death syndrome.

Speaking to Rogan on his podcast The Joe Rogan Experience, Elon admitted: ‘Actually I think it’s better being older and having a kid. I appreciate it more. Babies are awesome. They’re little lovebugs.

‘Wonderful, it’s great. Also, I’ve spent a lot of time on AI so you can kind of see the brain develop and you can see it learning very quickly.’

The Star Wars fan also loves the fact that X Æ A-12 was born on May The Fourth.

There was a little confusion between Grimes and Elon about the inspiration behind their son’s name.

Grimes had explained that the ‘A-12’ part of their son’s name is the ‘precursor to SR-17’ aka their ‘favourite’ aircraft, but Elon chimed in with a correction.

However, the mansplaining didn’t go down too well with the new mother who had just spent who-knows-how-long bringing a life into the world only to be corrected on Twitter by the babydaddy.

She wrote: ‘I am recovering from surgery and barely alive so may my typos b forgiven but, damnit [sic].’

Grimes – real name Claire Boucher – added: ‘That was meant to be profound’.

Elon then reassured: ‘U r a powerful [queen and fairy].’