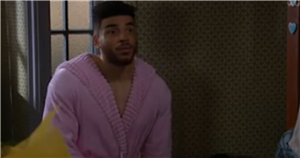 Emmerdale fans tuned in for a double bill of the hit ITV soap on Thursday night and viewers were over the moon when they watched Nate Robinson pop the question to his belle Tracy Metcalfe.

The blonde bombshell has had a spell of bad luck in the Dales over the last couple of months as she has battled with her mental health as a new mum while caring for baby Frankie.

But the doting girlfriend had a sweet moment of happiness in the village this week as her baby daddy surprised her with a romantic spare-of-the-moment gesture.

Yet avid fans of the long-standing show couldn’t help but notice Nate was caught off guard by Tracy’s early arrival as he donned nothing but her pink fluffy dressing gown.

As Tracy gets settled into the house, Nate is seen rushing around the house which is overflowing with ‘Welcome Home’ decorations as he tried to make everything perfect for his partner on her return.

Surprised by the change of scenery and his state of undress, Tracy asked: “What are you doing?”

An over-excited Nate hurried down the stairs as he hid a red velvet jewellery box in the pocket of his robe.

But the lucky man lost his cool when he stood on a Lego brick when he went down on one knee, as he screamed out in pain and joked: “Don’t walk around in bare feet.”

Confused by his sudden proposal, she asked again: “Nate, seriously, what are you doing?”

To which he responded: “Something I should have done ages ago, Trace.

“Look I’ve missed you, and I love you. Will you marry me?”

But fans were more impressed by Nate’s lack of clothing than the proposal itself, as viewers took to Twitter to share their opinions on the Yorkshire heartthrob.

One user wrote: "Hmmm Nate in a robe though,” with heart eyes emojis while another added: “NATE,” with four fire emojis.

A third chimed in with: “Nate looking fetching in pink – has he got the fluffy slippers to go with that outfit?”

A fourth penned: “Yay, Tracy has said yes to Nate! He looks nice in her pink dressing gown.”

Whereas others likened the classic pink dressing gown moment to that of Mick Carter’s similar scene from EastEnders.

Another fan added: “Nate copying Mick of Eastenders with is missus pink house coat on. It's been done before.”

Elsewhere, one quipped: “Nate turning into Mick Carter,” with a cry laughing emoji.