Emmerdale reveals why they chose certain characters for lockdown episodes 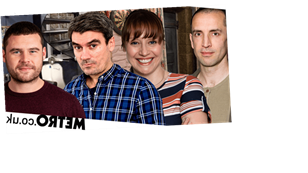 Emmerdale has resumed filming once more, and a series of special episodes have been produced, which will allow viewers the chance to see their favourites mainstays in lockdown.

The episodes in question will be a series of two-hander instalments, focusing on the dynamics between several groups of characters as they adjust to life in isolation.

With a vast array of compelling characters at their disposal, narrowing it down to a few for the lockdown episodes was no doubt a tall task.

Speaking about this, producer Kate Brooks said: ‘We obviously need to delve into lives of prominent characters who have a wider storyline.’

‘For Cain and Aaron, they’re both going through a break up situation and live together anyway – here are these people getting on each others’ nerves but have a lot to open up about, it’s interesting territory to explore.

‘There are lots of different personalities – Marlon, Ellis and Al, there are so many underlying tensions and we haven’t heard much of Al’s backstory – he has been a closed book so we get to unpeel some of the different levels of that character.

‘Paddy and Chas are so loved and people have taken them to their hearts and have seen them go through a rocky patch – how can lockdown impact them?

‘Mandy and Vinny are just fun and people love their relationship and they sing karaoke together but also to hear about what life was like when Vinny was growing up is interesting – we haven’t seen Mandy for 17 years. 17 years is a big gap – big life events have happened to her in that time.

‘How has her relationship with Vinny been impacted – there’s a big secret from her past. This is all brought to the front by Paul’s arrival in the village. He was gambler, reckless – to hear what it was like for Mandy and Vinny was a nice way to explore the seriousness but infuse it with fun.

‘With Nicola and Jimmy, they are comedy gold and we catch the essence of the couple who drive each other up the wall but deeply love each other. But we reveal something about them that informs future storylines. There will be an impact.

‘Sam and Lydia have just got married, Lydia is troubled about Huntington’s test and Sam just wants to protect her and lock up in this safe world.

‘This is their new marriage being tested by a global pandemic which felt like great territory. It’s also a very familiar set they are in for viewers? We considered the characters really well to ensure the right mix – we needed a broad spectrum.’

Related posts:
Latest News:
Jessica Plummer admits her ‘heart is bleeding’ after her EastEnders character Chantelle is murdered by husband Gray
Denise Richards: Did Charlie Sheen Force Her to Quit Real Housewives?
'The View': Sunny Hostin Calls Joe Rogan 'Misogynistic, Racist, Homophobic'
Angelina Jolie’s ‘Maleficent’ Character Is Inserted Into Brad Pitt & Jennifer Aniston’s Flirty Reunion In New Meme
Recent Posts
This website uses cookies to improve your user experience and to provide you with advertisements that are relevant to your interests. By continuing to browse the site you are agreeing to our use of cookies.Ok