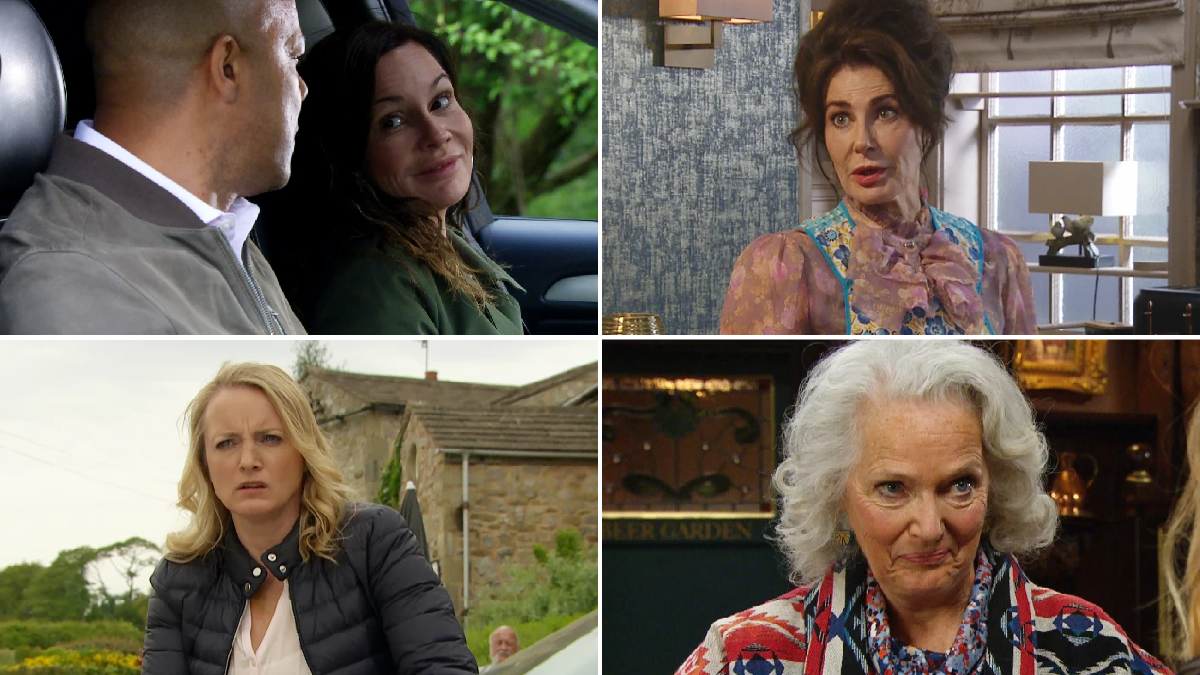 The aftermath of Faith Dingle’s (Sally Dexter) revelation that she is dying from cancer is impacting the wider family in Emmerdale – and Chas (Lucy Pargeter) is using it as an excuse to embark on an affair with Al Chapman (Michael Wildman).

Elsewhere, Nicola King (Nicola Wheeler) continues to suffer in the wake of her attack.

Her fears at their most dangerous height, she lashes out when she gets a visitor. And it could be a fatal attack…

Frustrated Chas feels like her life is spiralling out of control. Seeking comfort in Al, the two share a passionate kiss and Chas suggests they book a hotel.

Post her attack Nicola is really suffering and is left shaking when she hears knock on the door and a shadow appears. Relieved when it’s Bernice, she hides her inner torment. Nicola’s thrown when Bernice suggests she makes the pitch for the Green Initiative with her to the council. As Bernice leaves, Nicola is left feeling like a prisoner in her own home.

Mary tells Rhona to get a move on with her wedding plans, insisting that she wants to be alive to see it. Rhona is fuming when she finds out Mary’s booked a date for her wedding without telling her.

Leyla is sick of Liam banging on about babies and dismisses any idea of getting healthy as she recovers from her cocaine last night. Later, Leyla tries to talk herself down from taking more coke but fails.

Faith struggles with her chemo and collapses and guilty Chas cuts ties with Al.

Nicola does her best to keep Rodney from leaving before pleading with Bernice to come over and help with the presentation, desperate not to be left alone. A little while later, Nicola panics when she’s the only one available to pick up the kids from school.

Nicola makes her way to her car to pick up the kids but is overwhelmed by thoughts of her attack. Panicking, she slams on the accelerator and accidentally collides with David’s van.

Nicola stumbles when confronted by an angry David after their crash. When David demands insurance details, Nicola rushes back inside and bolts the door. David pleads for the insurance details from Nicola who’s unable to let him in.

Nicola soon latches onto the idea of exaggerating Carl’s illness to keep him at home despite the boy pleading to go back to school.

Overcompensating for her guilt, Chas jumps on board with Faith’s idea for a big knees up to celebrate Paddy’s birthday.

But the unspoken tension is clear when Kerry and Al bump into Paddy and Chas and Al later admits to Chas he was jealous seeing them together. Defiant Chas denies any feelings.

Smitten Laurel chats with a flirty Kit as amused Marlon watches on.

As Nicola ushers Elliot and Angel off to school as a wary Carl is unconvinced as to why he needs to stay at home with her. Once alone, Nicola fights a panic attack but is snapped out of it by Carl.

But whilst searching for chocolate to placate him he grabs her phone and darts outside. Terrified Nicola panics at the prospect of going outside.

Nicola enters full panic mode when she hears girls laughing outside and braces for the fight of her life thinking her attackers have returned. Terrified, Nicola hits someone over the head…

Billy’s taken aback when Dawn states that she’s not ready for more children.

David deflects when Victoria brings up plans for an expensive wedding. David’s glad that Victoria buys his lie when he feigns his neck injury.

The next day, Chas suppresses her awkwardness as Kerry recounts her night of passion with Al. Later on Main Street, Al and Chas clash, both jealous of the other’s relationship as suspicious Charity watches on….

Brenda calls out David for taking out a claim on struggling Nicola following their minor car collision and Priya informs concerned Victoria about David missing some payments.

Ethan snaps at shocked Charles, angered that Charles isn’t giving him and Marcus any time alone.

Bear informs Faith that Chas is worried about her drinking. Faith’s happy when he’s easily swayed into buying her more alcohol.