Emmerdale's Al goes to prison as Kim shops him after Priya & Debbie set him up? 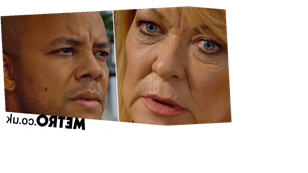 Priya has been syphoning money out of the HOP bank account, and transferring it into Al Chapman’s (Michael Wildman) personal account.

Viewers will know that the young woman is in cahoots with Debbie to destroy the man she thought she was going to marry, after she discovered he’d been cheating on her.

The other woman in Al’s life was none other than Debbie, and the pair craved revenge when the truth was revealed.

Al had no idea that either of the women knew of his abhorrent behaviour, but that all changed tonight, when they confronted him, before warning him that they’re not finished with him yet.

Al was shocked that both Debbie and Priya had successfully managed to pull the wool over their eyes, but little did he know what was to come.

Priya and Debbie warned of repercussions, and these repercussions ultimately came at the end of the episode, as an irate Kim confronted Al, and accused him of stealing money from the HOP bank account.

The penny dropped, but in spite of Al’s attempts to explain that he didn’t do this, Kim vowed to destroy him — reminding him that this isn’t the first time he’s let her down, but she made clear that she won’t be letting him away with it this time!

Will Al pay for his sins?