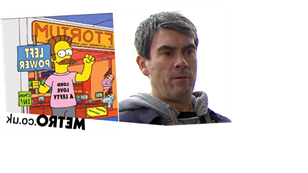 The Cain Dingle actor is current at home following the soap’s filming being suspended due to the global pandemic, and it certainly seems he’s putting his free time into good use.

Speaking to Phillip Schofield and Holly Willoughby on This Morning, Jeff shared that his new look has gone down well with his family – well, if you can call being compared to a cartoon character a positive thing.

‘My son said I looked like Ned Flanders!’ He shared.

‘I was shaving the stubble off [and decided to keep it],’ Jeff continued. ‘It’s a bit of a homage to my Dad.’

We wonder if this new moustache will be sticking around until after lockdown? Personally, we can’t see Cain Dingle walking into the Woolpack with a handlebar…

Viewers are currently hooked on Cain’s exploits on the ITV farm-bound soap, as he appears to have met his match in the sinister DI Malone (Mark Womack).

But could his struggles with the powerful gang actually end up in him making (another) exit from the show to be thrown in prison?

Jeff isn’t the only Emmerdale star to have switched his look up during lockdown, either – Danny Miller has also shaved his head.

Emmerdale, much like Coronation Street, has currently been forced to suspend its production during the coronavirus crisis.

But one good bit of news is that the government are ‘keen’ for both soaps to return to filming as soon as possible.

Emmerdale continues Friday 1 May at 7pm on ITV.