For Captain America, a star-spangled sidekick is as essential to the position as the shield. In the Marvel Cinematic Universe, Chris Evans’ Cap first had best friend-turned-brainwashed assassin Bucky Barnes (Sebastian Stan), then veteran and avian vigilante Sam Wilson (Anthony Mackie), and then both together. When the sidekicks take the lead, who becomes their sidekick?

Enter Joaquín Torres, played by Danny Ramirez. Though The Falcon and the Winter Soldier is a buddy action series focused on the titular heroes, Lieutenant Torres is introduced as Sam’s Air Force wingman and quickly becomes a trusted ally and, perhaps, a superhero protégé. Episode 5, “Trust,” sees Sam finally pick up Steve Rogers’ shield, seemingly ready to take up the mantle, and he leave his wings to none other than Torres.

Comic fans already knew that in the pages of Marvel’s books, Joaquín Torres becomes the new Falcon to Sam Wilson’s Captain America. When he landed the gig, however, Ramirez had never head of the character at all. “The first thing I did was go to a comic bookstore and get all of the comics,” he tells ET’s Ash Crossan.

“I had seen Endgame and I was crying, like, ‘What a way to end the movie!’ And I remember thinking, ‘If there is a continuation or whatever that may be, that would be a blessing to be a part of,'” he recalls. “And a few months later this came around.” 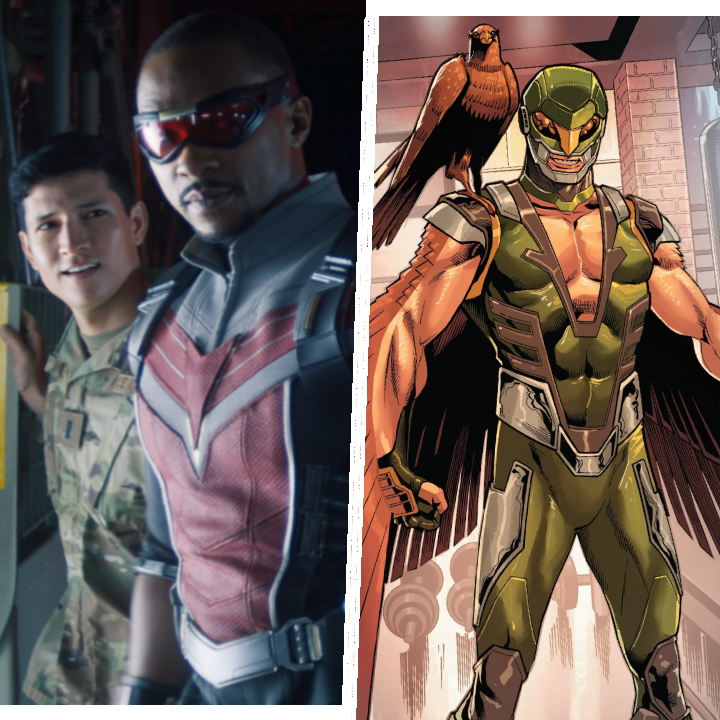 When Ramirez was approached to join the series, the draw for him wasn’t necessarily that he would get to don wings. “What was mentioned early on was just how important this character is in regards to representation,” the actor, of Colombian and Mexican descent, says. “Which to me was one of the most important things. How does it best represent who I am and people that are underrepresented?”

“When we had those conversations, they were so excited that it got me excited and I was like, ‘This is something that could be very special.’ And so far, it has,” Ramirez explains. “I think the most special thing has been seeing DMs of little kids being like, ‘Oh my god. You’re like seeing myself onscreen,’ or ‘We have the same last name!’ That’s why I wake up and do this thing.”

Director Kari Skogland tells ET, “He is a joy. Besides talented, he is such a nice young man who has a huge career ahead of him. We found him very early on” — with Ramirez marking his MCU debut ahead of appearing in the upcoming Top Gun: Maverick — “so, I think we are going to be on his coattails as he takes off like a rocket.”

With one episode of The Falcon and the Winter Soldier left, the question remains: Will Torres become the Falcon? Steve had Bucky and Sam. Even John Walker (Wyatt Russell) had Battlestar (Clé Bennett’s Lemar Hoskins). If Sam becomes the MCU’s new Captain America, he’ll need a sidekick of his own.

“Obviously he’s not in there for no reason,” head writer Malcolm Spellman teases. “If we had had 10 episodes, we had a giant storyline for him built out. But he does have plenty of real estate in these six. Cannot tell you where it’s going, but he is great.”

Naturally, Ramirez isn’t saying either. “I’m excited for whatever the future may hold,” he demurs. “With how important they see this character and how excited they are about him, they’re like, ‘We don’t want to half step [his storyline]. We want to give it its due, and we think it’s really important.’ They know years and years and years and years ahead of anything that I could possibly imagine, and they’re very good at what they do. So, I was just like, “I trust y’all.’ It’s this big, beautiful trust of knowing that they have his best interest in mind.”

The Falcon and the Winter Soldier finale is streaming Friday on Disney+.